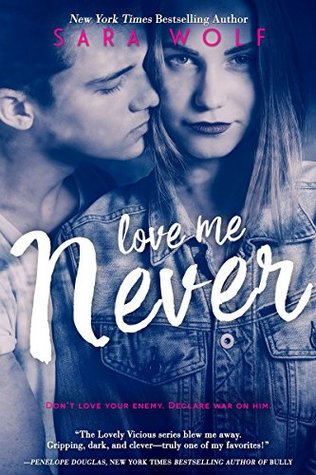 Book: Love Me Never
Author: Sara Wolf
Series: Lovely Vicious, #1
Genres: Young Adult, Romance-ish, Dark
Format: Kindle e-Book
Publication Date: 5th April 2016
My Rating:  🌕🌕🌕
Date Finished: 18th July 2021
Description:
Fire meets ice. Love meets hate.Seventeen-year-old Isis Blake hasn’t fallen in love in three years, nine weeks, and five days, and after what happened last time, she intends to keep it that way. Since then she’s lost eighty-five pounds, gotten four streaks of purple in her hair, and moved to the Buttcrack-of-Nowhere Ohio to help her mom escape a bad relationship.All the girls in her new school want one thing – Jack Hunter, the Ice Prince of East Summit High. Hot as an Armani ad, smart enough to get into Yale, and colder than the Arctic, Jack Hunter’s never gone out with anyone. Sure, people have seen him downtown with beautiful women, but he’s never given high school girls the time of day. Until Isis punches him in the face.Jack’s met his match. Suddenly everything is a game.The goal: Make the other beg for mercy.The game board: East Summit High.The reward: Something neither of them expected.
Review:
I picked this up for free early last year and something about the cover pulled me in after finishing my last book, so here goes.
This starts with Isis - Isabelle - invited to a party by the popular girls at her new school, hoping they can make a fool out of her if/when she makes some sort of faux pas. Instead she makes friends with tipsy Kayla who confesses the plan and Isis tries to avoid everything but then she sees Jack - the schools Ice Prince - and is intrigued by him. When he insults her new friend, she can't help but lash out and punches him in the face. This leads to an all out war between them with pranks and secrets flying about the halls of their school. Only, somehow, they grow closer and the line between love and hate is a very fine thing.
I loved Isis from early on. Well, her humour anyway. I did sympathise with Isis and her outlook on her self. I'm a bigger girl who's lost some weight but I still see myself as bigger. I felt for her. she'd been through some crap but she had a great way of dealing with it all with her wit.
Jack was a conundrum but I do feel like we knew him pretty well by the end. I grew to like him quite a lot, although I could have happily slapped him a few times throughout.
There were a few dark scenes described in this of both Isis and Jack's pasts involving sexual situations that not everyone will like to read.
I can't say I was happy with how the author chose to end this book. With amnesia and a broken spirit. And meeting a particular character while having amnesia?!
Also, because it didn't quite pan out how I would have like it to, I haven't decided if I'll continue the series or not.
at Sunday, July 18, 2021