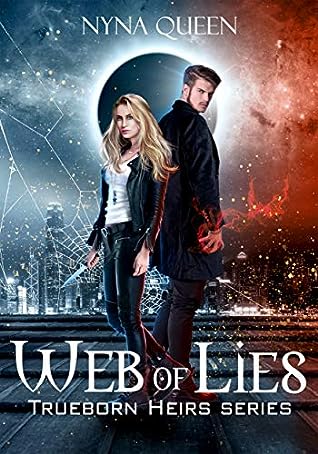 Book: Web of Lies
Author: Nyna Queen
Series: Trueborn Heirs, #2
Genres: Fantasy, Paranormal, Romance
Format: Kindle e-Book - Kindle Unlimited
Publication Date: 14th June 2020
My Rating: 🌕🌕🌕🌕
Date Finished: 21st June 2021
Description:
A royal gathering. She isn't invited. And if they find her, they will kill her...Against all odds, Alex Harper survived her deadly wounds and managed to shake off her faceless pursuers. But she is hardly safe. With a death sentence looming over her, she must quickly find out who is pulling the strings in this twisted game she has become a part of – before they catch her. But that means infiltrating the trueborn royal elite; a glamorous world that possesses no love for shaper mongrels such as Alex. One wrong step will be the death of her.To make things worse, she has to work with Darken again. Now back in trueborn territory, the scorching hot Deathbringer has retreated behind his armor of fire and the class difference between them becomes painfully obvious. Can their feelings for each other survive this growing gulf? Not that it will matter if Alex's self-control isn't good enough to pass for a member of the elite, and in the Royal Palace of all places! Caught between dark secrets and political intrigues, Alex soon realizes that she has entangled herself in a deadly web of lies...
Review:
This is probably going to be my last KU book of my latest subscription as my subscription ends on the 25th.
So this one picks up where the last left off with Alex in a sort of coma as her body tries to heal itself after the injuries she sustained at the end of the last book. When she does come to, everyone wants to find out who was behind the attempt on Stephane's and the childrens lives so they decide to follow several leads and in the end, end up at a high profile party at the Palace where Alex must pretend to be a high-born.
I do enjoy this series and I'll start by being honest. I was mostly caught by the thing that was transpiring between Alex and Darken. It had been brewing for a long time by the time they did the deed in the first one and both of them clearly had high hopes of something coming of it...but nope. At least not as of yet, as they keep having some of those charged moments and keep trying to say things before being interrupted. It was driving me a little mad!
I am also rather intrigued by who's behind the attempts on Stephane and his family's lives after finishing this one. It wasn't a big deal to me at the start but now I'm starting to get pulled into that craziness.
It did end on a bit of a cliffhager - not like the first! - with Alex's fate very close to hanging in the balance. She isn't in imminent danger this time but I very much want to know how this trilogy is going to end - and if Alex and Darken will finally just talk to each other and admit their feelings!
I will be impatiently waiting for its release.
at Monday, June 21, 2021