The Player and The Pixie - L.H. Cosway & Penny Reid 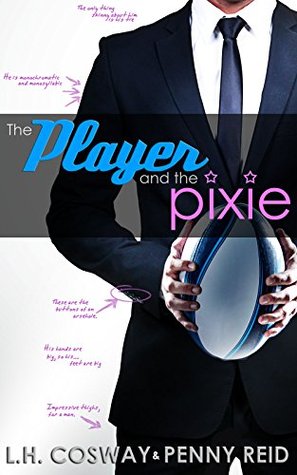 Book: The Player and The Pixie
Authors: L.H. Cosway & Penny Reid
Series: Rugby, #2
Genres: Contemporary, Romance, Sports
Format: Kindle e-Book
Publication Date: 12th April 2016
My Rating: 🌕🌕🌕🌜
Date Finished: 13th July 2021
Description:
How can someone so smokin’ hot be so bad in bed? I mean, Sean Cassidy is absolute rubbish. RUBBISH. He is the epitome of walking, talking false advertising and I want a refund! Plus he’s an arsehole. So… what is wrong with me that I can’t stop thinking about him?THE PIXIELucy Fitzpatrick doesn’t like rugby.As the little sister of Ireland’s most infamous rugby player, Lucy can’t seem to escape the championship-sized shadow cast by her big brother, or her mother’s frequent attempts to micromanage her future. Her rainbow hair is as free-spirited as her quest for inner peace, yet overbearing expectations keep bringing her down. And when she’s down, her compulsive little problem lands her in seriously big trouble.THE PLAYERSean Cassidy is a cold-hearted brute… or so he’s been told. Frequently. By everyone.His blonde locks, baby blues, and rock hard bod make ladies the world over drool with desire. As the rugby world’s second most infamous player, he should be basking in his success. But Sean has never been content settling for second place, and his frequent confrontations with Lucy’s big brother leave him cold. And when he’s cold, his compulsive little problem lands him in the lap of Lucy Fitzpatrick.THE PLANSean has a problem only Lucy can solve. Lucy has a problem only Sean can fix. The solution seems obvious: you scratch my back, and I’ll bail you out of jail. But when their business arrangement unexpectedly leaves Sean scorching hot and Lucy on the precipice of inner peace, can they convince the world—and Lucy’s big brother in particular—that this is the real deal?Either way, both the Player and the Pixie are about to teach each other some pretty monumental lessons about family, life, but most importantly, love.
Review:
I bought this off Amazon last year some time since I've enjoyed reading both authors before. This is the first book I've read in this series.
This one starts with Lucy at her brothers sports party for the Irish rugby team when another player who isn't particularly liked, Sean, walks in and starts mouthing off at Lucy's brother. They have an argument and things are broken up by the rest of the team, though Lucy is intrigued by the handsome athlete. They end up meeting a while later in a department store where Lucy's tiny shoplifting habit is seen by Sean and he finds himself drawn to the rainbow haired girl in the most carnal of ways. Things take an unexpected turn when Lucy ends up in bed with Sean and realises just how terrible he is at sex and he asks her to teach him what she knows.
So I'll be honest, I wasn't sure about Sean to start with. He wasn't the most likeable guy, seeming to enjoy taunting people but the more we got to know him, the more he grew on me. There was a reason for him being like he is and, luckily, Lucy works it out for herself.
Their romance was cute - and steamy! - when it finally kicked into gear. I loved how Sean came out of his shell and stopped being the pain-in-the-arse guy he had been to pepper Lucy with compliments and. dare I say, orgasms. He really grew on me in the end.
You can clearly see the Irish and the American uses in this book. You have words like color and knickers. One very much an American spelling while the other is distinctly British. It was a bit of a strange mix but I enjoyed it nonetheless.
I would be interested in reading more of this series. Judging by the wedding scene in this one I'm assuming it's going to be Sean's cousin and one of his teammates.
at Sunday, June 13, 2021