By A Thread - Nyna Queen 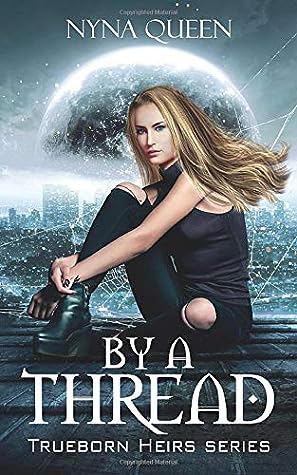 Book: By a Thread
Author: Nyna Queen
Series: Trueborn Heirs, #1
Genres: Paranormal, Fantasy, Romance
Format: Kindle e-Book
Publication Date: 1st May 2019
My Rating: 🌕🌕🌕🌕
Date Finished: 18th June 2021
Description:
“I’m a spider, sugar. My shaper kind doesn’t bear that name for nothing.”
That's not something Alexis Harper dares to say very often. If she did, it might just get her killed. Not that she is an easy mark, but even fools get lucky once in a while. In a world where the magically gifted trueborn rule and the magicless halfborn slog away in the slums, half-blood mongrels like Alex are outcasts—feared and shunned. For most of her life, she has lurked in the shadows, trying to keep her true nature a secret. But the secrecy ends abruptly when she saves two trueborn aristo children from a group of hired killers.
Accused of a crime she didn't commit, Alex suddenly finds herself running from powerful enemies, with no one around to trust. Or what about the mysterious stranger who has been following her? He is one of Death’s Servants, born and bred to kill at the country’s command. Not the most preferable ally, but then, her choices are limited. Soon she has to decide whether she can trust him or not—it’s a gamble she might not survive either way. And before Alex knows what is happening, her life is hanging by a silken thread…
Review:
I picked this up for free a few months back after seeing several people I follow on Goodreads give it good ratings.
This starts with Alexis working at her job as a server at a bar in the slums where her identity as a half-born is a secret from her colleagues. When she picks up an extra shift she isn't expecting two aristo children to teleport into her bar or for the group of men that appear seconds later to try and kill them. Jumping to their rescue she ends up going on a cross country journey to try and get them home, only to run into their uncle Darken - a deathbringer - who is searching for the children while being named as the children's kidnapper and a murderer. As a group they try and find an easy way back to the kids home but it isn't easy when being hunted at every corner.
I did enjoy this. The author had a very descriptive way of writing, using phrases I either hadn't heard in a long time or just not at all. I'm not normally a fan of the overly descriptive and I'll admit that I did skip a few paragraphs here and there because I wasn't interested in what was being said but at times it described the people and the scenery beautifully.
There was a tension between Alex and Darken from pretty much their first meeting and it slowly became something sexual. I liked their verbal sparring sessions since
I do feel like English is not the authors first language. There were times when I wasn't sure what the author was trying to say with the words she'd chosen. There were also a few times when the wrong tense of a particular word was used. I just think it needs going over with a fine-tooth comb to straighten out those few kinks. Things like this:

I enjoyed this enough to want to continue the series... especially considering it ends on a bit of a cliffhanger.