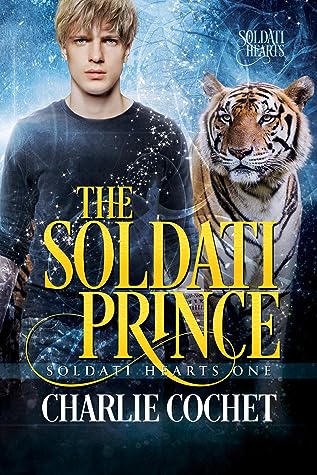 Book: The Soldati Prince
Author: Charlie Cochet
Series: Soldati Hearts, #1
Genres: MM Romance, Shapeshifters
Format: Kindle e-Book - Kindle Unlimited
Publication Date: 25th August 2020
My Rating: 🌕🌕🌕
Date Finished: 7th May 2021
Description:
One moment Riley Murrough is living a normal life working in a coffee shop, and the next he’s running for his life from demons, learns he bears the mark of a shape-shifter king from a magical realm, and—worst of all—he’s destined to become the mated prince to the arrogant tiger shifter he would rather strangle.Khalon, the shifter king, is equally distraught at the idea of being bound to a human prince, and along with his Soldati warriors, he sets out to return Riley to his own world where he belongs. On their journey they might discover why the priestess brought them together—if they can escape the demons and make it to her alive.First Edition published as The Soldati Prince in Charmed and Dangerous (anthology) by JCP Books LLC, 2015.
Review:
I'd been eyeing this for a while due to me liking the author's THIRDS series, so I decided to download it from the KU Library.
It starts with Riley at work before two men walk in and suddenly start to leak black shadows which freaks Riley out and he runs from the cafe, only to be rescued by some tigers - which also blows Riley's mind. The tigers shift into people and after a short discussion decide to take Riley with them back to their Kingdom while they try to make sense of what they've discovered - that Riley is the Soldati Prince and mate to Khalon, the Soldati King.
This is quite a short book - showing as less than 150 pages - and so moves along quite quickly. We do get to know the main characters quite well and I did find both Riley and Khalon to be likeable, especially in those moments when it was just the two of them. I'll admit to having a little cry at one point near the end. I wasn't expecting that to happen and I felt a little devastated on Khalon's behalf.
As much as I did quite like this, I'm not sure if I'm going to continue the series. It didn't really grab me but it did do a good build up for the next book in the series with tension between Reynor and Toka -  I think I spelt those right?
at Friday, May 07, 2021