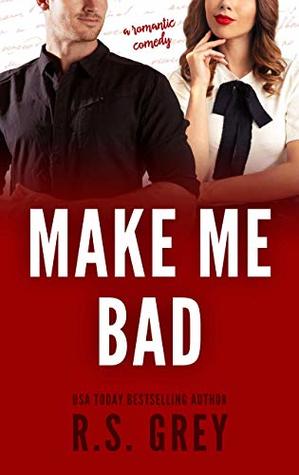 Book: Make Me Bad
Author: R.S. Grey
Genres: Contemporary, Romance, Comedy
Format: Kindle e-Book - Kindle Unlimited
Publication  Date: 7th March 2019
My Rating: 🌕🌕🌕
Date Finished: 31st May 2021
Description:
I was issued a warning: stay away from Ben Rosenberg.As Clifton Cove’s resident “king”, he thinks he’s entitled to anyone and anything.The trouble is, I’ve spent my whole life following the rules and playing it safe. I know what it feels like to be the good girl. I’m the police chief’s daughter and a librarian—for adorable children, no less. My wardrobe consists of colorful sundresses and baggy jeans. I might as well have a Post-it stuck to my forehead that reads: Yup, she’s a virgin.An all-nighter with a fictional hunk is about as exciting as my life gets, until one day, fate decides to take pity on me and shove me straight into the path of Mr. Off-Limits himself.Oof.Just as I suspected, every inch of him promises to be my demise. Up close, he’s tall, menacing, dangerously handsome—the type of man who’s never spent a single moment worrying about the opinions of others. A well-behaved girl would do as she’s told and avoid him at all costs, but I’m overdue for a little rebellion.No more Friday nights sprawled out on the couch in my comfiest pajamas. No more wishing I had the courage to misbehave.Everyone thinks Ben is going to ruin me.They think he’ll chew me up and spit me out.Well, Ben…go ahead.Tempt me. Taunt me.Make me bad.
Review:
I got this from the KU Library.
This starts with Ben out with his friend Andy in the shadier part of town and a group of guys he went to school with taunting him. A little later Madison is having a...erm, pretty crappy birthday party at the library where she works with her colleagues clapping and equally moaning about having to be there. Heading home afterwards, she's held up at gunpoint and Ben ends up coming to her rescue after leaving the police station. Things go from there with neither of them really being able to forget the other when out of the blue Madison asks Ben to help make her bad.
I did enjoy this, though the comedy elements didn't always work for me. I did like Ben and Madison's romance, though. It was cute. It did feel like it happened rather quickly but as I've already mentioned it was done in a really nice, sweet way. They didn't even have any sort of falling out - like in every other romance book I've read - so that was different, a nice change. I did miss some of the angst, though. It felt too perfect.
This isn't my first book by the author and it probably won't be last either.
Amazon UK      Amazon US
at Monday, May 31, 2021