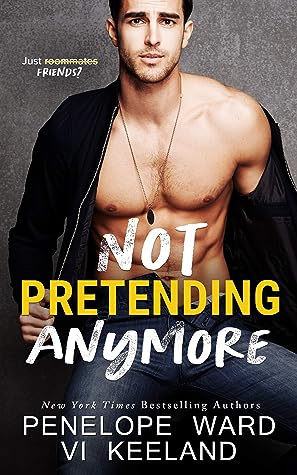 Book: Not Pretending Anymore
Authors: Penelope Ward & Vi Keeland
Genres: Romance, Contemporary, Friend to Lovers
Format: Kindle e-Book - Kindle Unlimited
Publication Date: 10th April 2021
My Rating: 🌕🌕🌕🌕
Date Finished: 26th April 2021
Description:
Finding a good roommate through a classified ad isn’t as easy as it sounds.I was starting to lose hope.Until a knock at my door came and God answered my prayers.Except…uh…wrong prayer, God.I’d definitely requested the big guy find me a drop-dead gorgeous man on more than one occasion...just not as my roommate.Declan Tate talked me into interviewing him anyway.While he was amusing and charismatic, I wouldn’t have been comfortable living with a man, so I regretfully declined.Then cupcakes showed up at my door—freshly baked by Declan and just as sinfully delicious as he was.You could say he was persistent.I eventually folded. It wasn’t like I had another viable candidate anyway.Plus, I was interested in someone else. And Declan was into another woman. So it wasn’t like anything would happen romantically.After he moved in, the two of us became the best of friends. We even started to give each other advice on getting our crushes to notice us.Eventually, Declan concocted an idea: we should pretend to be a couple to make our love interests jealous.I was hesitant, but went along with it anyway. To my utter shock, his crazy plan worked.Now I was dating the supposed man of my dreams, and my best friend had the woman of his.But there was one problem.I couldn’t stop thinking about Declan.Those feelings we were trying to fake?Yeah…I wasn’t pretending anymore.
Review:
I got this from the KU Library.
This one starts with Molly looking for a room-mate and interviewing a lot of people before Declan turns up when she specifically requested women only. He chips away at her resistance until she agrees to let him stay and they become fast friends. Only as they spend more time together feelings emerge - only they're both in the beginnings of new relationships that they helped each other get in.
One thing I picked up on near the beginning was about her liking breakfast food but not wanting to eat it any other time of day. It got me wondering if all-day-breakfast is just a British thing?
Anyway, I did like this. It was a slow-burn friends-to-lovers romance. It did take a good 85% or so for the characters to realise their feelings for each other and to actually act on them. There were some really nice moments between them in the build up to it though. They just clicked so well.
It wasn't written in the authors' usual style but I did like that it was different to their norm. It wasn't all hot and heavy. It was more gentle and dealt with mental health issues.
I look forward to reading more books by these two authors.
at Monday, April 26, 2021