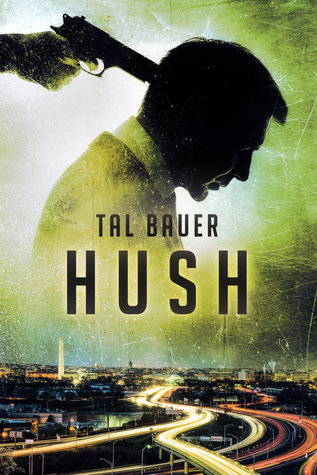 Book: Hush
Author: Tal Bauer
Genres: MM Romance, Romantic Suspense
Format: Kindle e-Book - Kindle Unlimited
Publication Date: 12th July 2017
My Rating: 🌕🌕🌕
Date Finished: 8th April 2021
Description:
A federal judge running from the truth.A U.S. marshal running from his past.A trial that can plunge the world into war.Federal Judge Tom Brewer is finally putting the pieces of his life back together. In the closet for twenty-five long years, he’s climbing out slowly, and, with the hope of finding a special relationship with the stunning Mike Lucciano, U.S. Marshal assigned to his DC courthouse. He wants to be out and proud, but he can’t erase his own past, and the lessons he learned long ago.But a devastating terrorist attack in the heart of DC, and the subsequent capture and arrest of the terrorist, leads to a trial that threatens to expose the dark underbelly of America’s national security.As Russia beats the drums of war, intent on seeking revenge, and the United States struggles to contain the storm before it races out of control, secrets and lies, past and present, collide in Judge Tom Brewer’s courtroom. With the world’s attention fixed on Tom and this case, he suddenly discovers he may be the only person who can put everything together in time to stop the spark of a new world war
Review:
I got this from the Kindle Unlimited Library.
This starts with Mike finishing work as a Marshall that watches over courthouses early so he can go home and surprise his boyfriend, Silvio. Only Silvio isn't alone and Mike is the one that gets the surprise. Fast forward a few days and we see things from Judge Tom Brewer's POV. He's been in the closet since the early 90's - when views of gay men and AIDS were really bad - but finding out the man who sits in all his trials and watches over him is gay makes him wish for a partner to share his life with and, if that person could be Mike, well that would be a dream. Throw in an attempted assassination of a Russian national in the heart of Washington and chaos reigns as the two countries end up on the brink of war with Tom tasked as the judge to bring the sniper to Justice.
The first half or so of this book was about the two men slowly broaching the idea of a relationship and falling for each other. It was really cute at times. The second half involved the threat of world war 3 between the USA and Russia.
Being brutally honest I'll admit I had very little interest in the trial and skipped sections at times because it was all going straight over my head. I didn't know what they were talking about half the time and not the most interested in finding out more about it.
I was intrigued by who was behind it all though. Who was the mastermind behind this attempted assassination and why. It did take me by surprise a little when I found out who it was. Clever.
I will probably read more books by this author at some point in the future.
at Friday, April 09, 2021