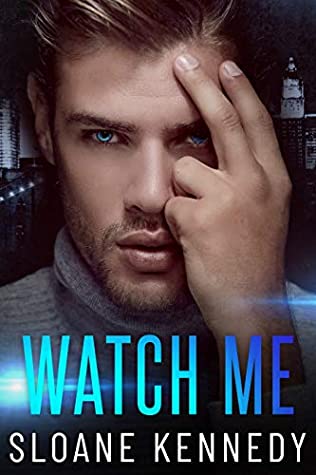 Book: Watch Me
Author: Sloane Kennedy
Genres: MM Romance
Format: Kindle e-Book - Kindle Unlimited
Publication Date: 8th November 2020
My Rating: 🌕🌕🌕🌜
Date Finished: 8th March 2021
Description:
NikolaiMy rules when it comes to my job in personal protection are pretty simple:1. Protect the client’s life, not their feelings.2. Don’t put hands on a client unless you’re getting them out of harm’s way.3. For God’s sake, don’t do something stupid like fall in love.Twenty-four hours after meeting Jude Archer, rules 1 and 2 are already out the window.Thankfully there’s no chance of falling for the callous businessman who cares more about his next deal than he does his own safety.Jude may have managed to make fools of all the guys his wealthy boss and rumored lover has hired to watch him, but he’s playing in the big leagues now. The son of a bitch might not value his life, but I’m pretty fond of mine.Time to teach the clueless Jude Archer a few hard lessons…JudeMy rules for success aren’t for everyone, but they should be.1. Work hard.2. When you’re on the verge of giving up, work harder. Life owes you nothing. You have to take what you want.3. For God’s sake, don’t do something stupid like get distracted by feelings.With just weeks between me and the closing of the deal that will give me everything I want, I don’t have time to worry about a supposed stalker who hasn’t had the balls to do anything more than send a few threatening letters to my wealthy boss.Sure, I sent a few so-called bodyguards packing. Even if I thought I was in serious danger, I can’t have someone watching me 24/7. My life works the way it does for a reason and no one, not even the gorgeous Russian ex-soldier who thinks he can scare me into submission, is going to change that.Nikolai Falkov thinks he has something to teach me? Yeah, good luck with that.
Review:
Got this from the KU LIbrary.
This starts with Nikolai heading in to see his boss who talks about a client that has managed to shake off every other security detail he's had and so he wants to send in the big guns - Nikolai himself. Nikolai sticks to Jude like glue, slowly getting to know the man and an attraction flares between them but Nikolai tries to hold himself back due to the rules he holds himself by. Jude is desperate to prove himself worthy of his job and the role that he will soon inherit so spends hours at work, ignoring everything else in his life including food and people. Then Nikolai shows up at his office and suddenly his rigid control is slipping as the man sneaks under his defences.
I'll be honest, the cover pulled me in with this one. I'd seen it all over Amazon - almost like it was stalking me! - before I gave in and downloaded it from the KU Library.
The romance between the two men did seem to come a little out of nowhere after that initial burst of attraction but they also had some really deep and thoughtful conversations and interactions with each other that just screamed "perfect match". They grew to understand each other and know what the other wanted/needed and it was nice to read. They complimented each other and it was nice to see Jude begin to relax around his new lover.
One issue I had with this book was the stalker. Apart from a few letters we see at the start we don't have any other things arrive in all the time that Nik is protecting Jude and then BAM - he's at the hospital, managing to find them in a stairwell, holding a gun on them.
I will probably read more of this authors book in the future.
at Tuesday, March 09, 2021