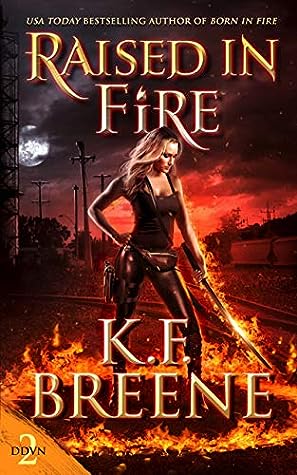 Book: Raised In Fire
Author: K. F. Breene
Series: Fire & Ice Trilogy, #2, Demon Days, Vampire Nights, #2
Genres: Urban Fantasy, Romance, Vampires, Demons, Shapeshifters
Format: Kindle e-Book - Kindle Unlimited
Publication Date: 16th May 2017
My Rating: 🌕🌕🌕🌕
Date Finished: 28th February 2021
Description:
It is a common truth in my life that when it rains, it pours.The killings that once plagued New Orleans are cropping up again in Seattle. The local office is stumped. I’m called out to lend a fresh set of eyes, and my unique magical touch.It’s only when I get there that I realize the Seattle office isn’t stumped at all.They’re being silenced by the Mages’ Guild, a corrupt magical institution that doesn't want word to get out of what is plaguing the city. Worse, news of my magic might’ve slipped down to the underworld, hitting the ears of some extremely powerful demons.What I thought was a routine murder investigation turns into a fight for my life. With the help of Darius, my stalker elder vampire, and my dual-mage side kicks, I somehow have to dodge the Guild in order to stop one of the most powerful demons I’ve ever encountered. If I don’t? It’ll escape back down below with proof of what I really am.My life hangs in the balance, and this time, I can't see a way out.
Review:
Got this from the KU Library.
This picks up not long after the events of the last one. With the papers from Darius making her legal to work at the MLE, she is now a normal member of the team instead of a bounty hunter. What she didn't expect was to be bored with the job and has been causing chaos in the office just for something to do. When the latest case causes yet another mark against her name, she quits, but is contacted by another office to come and help them solve the issue of demon summonings that are sacrificing people and causing panic in the area. Reagan just doesn't realise it's all a set up to lure her there.
I am getting very into this initial trilogy of the Demon Days, Vampire Nights series. All the things I mentioned enjoying in the last review still stand. Reagan and Darius' thing has evolved quite a bit in this one, which I was rather pleased about. Dizzy and Callie, the mages, are still adding a comedy factor during some of the serious scenes and definitely during the non-serious ones. And Reagan's personal neighbourhood watch crew - the shifty characters that are continually roaming her street - are still finding out interesting things to inform her about.
I've become a fan of this author because she writes characters that you can't help but like and interesting plot lines. I think she's going to be an author that I have to try and read all of her books just to see if it's all brilliant.
I've already started book 3 to how this trilogy is going to end. I have so many questions that need answering!
at Monday, March 01, 2021