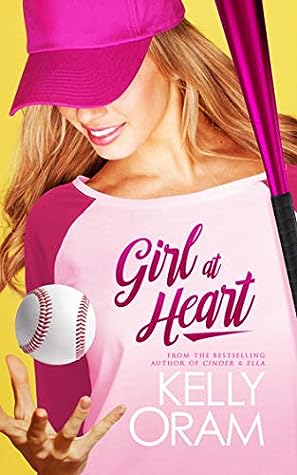 Book: Girl at Heart
Author: Kelly Oram
Genres: Young Adult, Romance, Sports
Format: Kindle e-Book - Kindle Unlimited
Publication Date: 4th November 2019
My Rating: 🌕🌕🌕🌕
Date Finished: 29th March 2021
Description:
As the daughter of a successful Major League pitcher, Charlie Hastings has baseball in her blood. Unfortunately, being the only girl on her high school baseball team, Charlie has always been just one of the guys.When her best friend, and secret love of her life, asks another girl to the prom, Charlie is devastated. She’s tired of being overlooked by boys because she’s not like other girls. Suffering a massive identity crisis, she decides to hang up her cleats and finally learn how to be a girl.But with only two weeks until the state championships, the Roosevelt High Ravens can’t afford to lose their star catcher. Team captain Jace King makes her a deal: Don’t quit the team, and he’ll help her become the girl she’s so desperate to be. After all, he’s got four sisters, one of whom happens to be a cheerleader. He knows a thing or two about girls. (And if he can win her heart in the process, all the better.)
Review:
Got this from the KU Library.
I binge read this authors books a few years ago now and made it a personal challenge to read everything she's ever written but when I fell out of my Young Adult obsession, I gave up on it. But now that I'm enjoying them again, I've picked up this book and hope I like this as much as I used to like this authors work.
So this starts with Charlie determined to tell her best friend and crush, Eric, that she likes him and ask him to senior prom only for him to tell her he's already going with someone else and he didn't think Charlie was into dresses and dances - making her feel very tomboy and unattractive. She tries to quit her baseball team in the hopes she can somehow come across as being more girly but the team captain, Jace, tells her she'll regret not finishing the season and tells her he'll enlist his twin sister in helping her find the right clothes and makeup to suit her - all while Jace is trying to make Charlie fall for him.
I enjoyed this. I like to have a bit of cute to mix in with all the steamy stuff I normally read and this was perfect. Super cute clean teen romance. I was smiling like an idiot for most of it with just how sweet a couple these two are. It's a slow build up with touches and glances and Oh my God, I think he likes me's. Cuteness overload.
I loved Charlie's dad. I feel he deserves a mention. He's the overprotective dad but in a fun way; she has a slit in her prom dress up to mid-thigh? Her dad's response: That's fine, we can duct tape it. They have a great relationship and are so close.
As for the rest of the team - though we don't get to know all of them - they're really likeable with their teasing and ribbing of each other. I'd be interested to read more of them and more of this authors books in the future.
at Monday, March 29, 2021