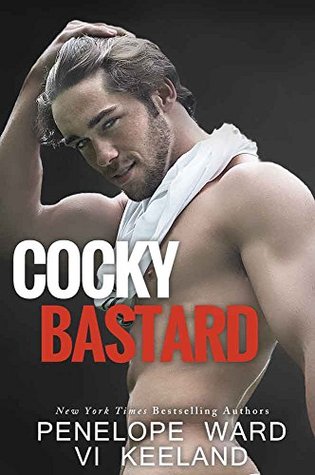 Book: Cocky Bastard
Authors: Penelope Ward & Vi Keeland
Genres: Romance, Contemporary, Second Chance Romance
Format: Kindle e-Book - Kindle Unlimited
Publication Date: 15th August 2015
My Rating: 🌕🌕🌕🌜
Date Finished: 17th March 2021
Description:
He was someone who belonged in my wildest fantasies instead of a rest stop in the middle of Nebraska.A sexy, cocky, Australian named Chance was the last person I expected to run into on my cross-country drive.When my car broke down, we made a deal. Next thing I knew, we were traveling together, spending sexually-tense nights in hotels and taking unplanned detours.My ordinary road trip turned into the adventure of a lifetime. It was all fun and games until things got intense.I wanted him, but Chance wouldn’t make a move. I thought he wanted me too, but something was holding him back.I wasn’t supposed to fall for the cocky bastard, especially when I knew we’d be going our separate ways.All good things must come to an end, right?Except our ending was one I didn’t see coming.
Review:
Got this from the Kindle Unlimited Library.
It starts with Aubrey going cross country for her new job after catching her boyfriend cheating on her. She's at a rest stop when she bumps into Chance who flirts with her and teases her a little before it becomes clear that his bike has gone kaput and since they're both heading in the same direction, they decide to head out together although Aubrey is reluctant at the start. Before long an attraction sparks to life and they experience some really beautiful things together.
It's told in both of their POV's but Aubrey gets the first half and Chance gets the second so you get to see both lots of emotions and how much they cared about what they'd done together and how close they'd gotten. They had a lot of fun together and you could see their relationship grow on every page so his sudden departure from her life was unexpected and then the "two years later" appeared on the next scroll of my Kindle and I did roll my eyes a little.
That was when we got Chance's POV and I began to understand why he'd been like he had been with her - flirty but held himself back at times - but why he didn't just tell her what had happened I'll never know. Weirdly though, I was cheering him on. I wanted him to win Aubrey back. It was rather touch and go for a while in that second half and I was starting to get a little emotional on Chance's behalf when it wasn't entirely clear that Aubrey was going to choose him.
One quote seemed right for this second chance romance:

I think one of my favourite bits of this entire book was the goat. From the start when they almost ran him over, he's been the book's comedy element. And I agree with Chance; for a supposed blind goat, he certainly seems to know where people are standing. I actually started to fall in love with the little thing myself in all its quirkiness.

I've read a few collaborations between these two authors and enjoyed them and I will certainly be reading more of them in the future.