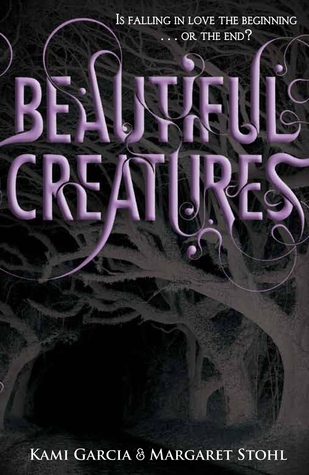 Book: Beautiful Creatures
Authors: Kami Garcia & Margaret Stohl
Series: Caster Chronicles, #1
Genres: Young Adult, Paranormal, Magic
Format: Paperback
Publication Date: 1st December 2009
My Rating: DNF @ 236 of 563
Date Finished: 24th March 2021
Description:
Lena Duchannes is unlike anyone the small Southern town of Gatlin has ever seen, and she's struggling to conceal her power, and a curse that has haunted her family for generations. But even within the overgrown gardens, murky swamps and crumbling graveyards of the forgotten South, a secret cannot stay hidden forever.Ethan Wate, who has been counting the months until he can escape from Gatlin, is haunted by dreams of a beautiful girl he has never met. When Lena moves into the town's oldest and most infamous plantation, Ethan is inexplicably drawn to her and determined to uncover the connection between them.In a town with no surprises, one secret could change everything.
Review:
I've had my eye on this series since I saw they were making it into a movie so when my friend's daughter was giving her paperback copies of the series to our work's charity book sale, I decided to grab them to read.
It starts with Ethan getting ready for his first day at school after suffering very real dreams involving a girl he's never met before and a song that taunts him. Heading to school he hears rumours of a new girl in town, the niece of the towns oddball resident. It isn't long before Ethan meets the girl and recognises her from the dreams he's been having and he can't help but want to get to know her. Only things aren't as straight forward as they seem with Lena.
It took me a long time to get into this - well past the 125 pages mark. I'll be honest, I was ready to give up on this book at various points up to that point because it was dragging it out way too much in my opinion. Nevertheless, I did eventually get into it but it was still so slow going. Nope. I lied. It started to get good; we had a magic house and a magic family and a forbidden romance but the pacing was crap. I just completely lost interest. If it had been half the size length wise, I may have stuck it out (Note: I'd have already finished it by now) because after almost 6 weeks of reading I should have finished it by now!
I did not gel with this one at all. We had so much unnecessary information and repeated information... I just couldn't do it anymore. There are books out there I'd enjoy a lot more that I could be reading right now. This book and the rest of the series can go back and be in my works charity book sale.
at Wednesday, March 24, 2021