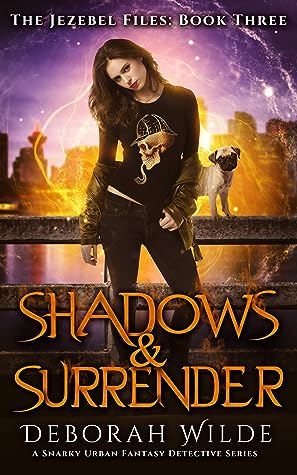 Book: Shadows & Surrender
Author: Deborah Wilde
Series: Jezebel Files, #3
Genres: Urban Fantasy, Mystery, Romance, Magic
Format: Kindle e-Book - Kindle Unlimited
Publication Date: 2nd June 2020
My Rating: 🌕🌕🌕🌕
Date Finished: 13th February 2021
Description:
Ash wanted a career filled with challenging mysteries.
She should have specified she didn’t mean her family.When a murder scene reveals a connection to Ash’s father who abandoned her when she was thirteen, she's stunned. He may be the key to stopping Chariot from achieving immortality.The catch? He could be hiding anywhere in the world.To make matters worse, Levi, Ash's romantic entanglement and brand-new boss, has his first official case for her: helping his ex-girlfriend, a.k.a. Ash's childhood tormentor.No one ever said adulting was easy.As secrets multiply and alliances get deadlier, Ash's investigation takes her back into Hedon and into her own past. Cracking this case could reunite her family... or cost her everyone she holds dear.Actual ghosts have nothing on the ghosts of her past.
Review:
This one starts with Ash being questioned by the police over the death of someone from the first book in this series, the security guard at the auction. This then leads Ash to the guys sister who was also indirectly involved in that first book by setting the wards on the holding cells. She also gets hired by Levi to find out what's happening with his ex, Mayan, who has never been nice to her, and the fact that she came to him for help before doing a 360 and flirting with him. It's all rather intriguing as things progress further in her hunt to find Chariot and she learns more about her magic.
I had a big grin on my face about the direction things have been heading in regards to Ash and Levi and woohoo! They finally admit that things are great between them and agree to become a couple. Things don't always go smoothly though, not when secrets come out. I was ready to chuck my laptop and kindle when it all started to fall apart at the end.
As for the mystery of her dad...well, we learn of what happened 15 years ago. It's a rather complicated story and I did feel for Ash when she learnt what went down. It's all tied up in the Chariot issue and I am looking forward to the next book so I can see her take down the shady organisation.
Ash certainly has a lot to deal with in this but I love her support team, they're all pretty amazing in their own way and I'm off to start book 4 to see if they will finally bring down the bad guys and get their happily ever afters with their significant others.
at Saturday, February 13, 2021