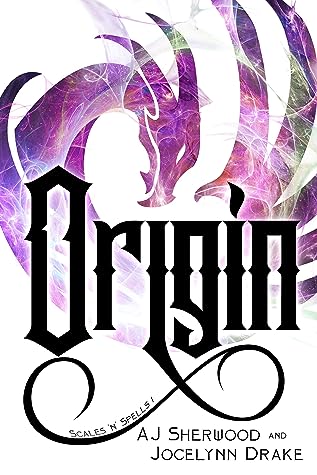 Book: Origin
Authors: A.J. Sherwood & Jocelynn Drake
Series: Scale 'n' Spells, #1
Genres: MM Romance, Urban Fantasy, Shapeshifters
Format: Kindle e-Book - Kindle Unlimited
Publication Date: 1st October 2020
My Rating: 🌕🌕🌜
Date Finished: 21st February 2021
Description:
Cameron wants to make it clear that he did not go into the festival to find a dragon mate.Germany is supposed to be an escape. With a new mechanical engineering degree, a new job looming, and a whole life planned out that isn’t his, Germany seems like the best place to find himself.So how does he end up discovering his lost magic heritage, running from bad guys with a secret agenda, and being adopted by the not-so-extinct Fire Dragon clan?Cameron blames tall, dark, and sexy Alric, king of the Fire dragons. His fated mate. Because of course he is, and mates are meant to take the blame, right?It may take a hot second, but as Cameron learns more about the scarred Alric and the life he’s landed in, Cameron realizes that perhaps this is where he’s meant to be, magic and mates and kidnapping and all.Turns out coming to Germany wasn’t an escape but his awakening.
Review:
Got this from the KU Library.
This starts with Alric and some of his dragons wandering around the Dragon Festival happening in his small German town. While there he gets a call off one of his people telling him they've scented a mage - a magic user they haven't seen another of in centuries - and try to hunt them down. Cameron is an American tourist taking in Europe before going back home to a job he doesn't want. When he learns that he's a mage and that they usually pair off romantically with dragons to create a powerful team, his attraction to Alric suddenly becomes all he can think about.
I did like this but there were times when it got kinda boring. There wasn't a lot happening for the first 60% or so of the book with just internal monologue-ing and a heap of info about the history of dragons and the castle. Things (finally) moved along with regards to Alric and Cameron's relationship but other than those bits I started skimming pages because I just wasn't all that bothered about anything else that was going on in this.
The last 25% was quite fun and action packed after Cameron got himself kidnapped. Alric went on a rampage with his dragons to get his mate back from the Jaeggi.
I've enjoyed Jocelynn Drake's books before but they were darker than this one. This was rather fluffy and light in comparison and in a way that felt wrong considering these were battle hardened dragon-shifters who'd lost most of their clan in a war.
I don't think I'll be continuing the series.
at Monday, February 22, 2021