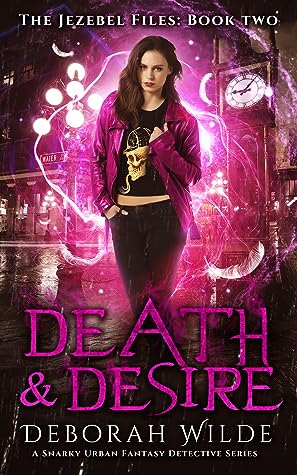 Book: Death & Desire
Author: Deborah Wilde
Series: Jezebel Files, #2
Genres: Paranormal, Magic, Urban Fantasy, Romance
Format: Kindle e-Book - Kindle Unlimited
Publication Date: 9th March 2020
My Rating: 🌕🌕🌕🌕
Date Finished: 9th February 2021
Description:
Angel of Death.Black market magic.When you’re Ashira Cohen, smart is the new kickass.When Ash is hired to solve her first murder, it seems like a perfectly normal, open-and-shut case of family feuds and bad blood. Until Ash discovers an evil magical artifact and her lead suspect is of the winged, white-robed, celestial variety. As if that weren't bad enough, if she can't find the perpetrator quickly, fourteen vials of lethal, ghostly magic will be sold to the highest bidder.Her quest to figure out her Jezebel powers and find the shadowy organization responsible for stripping teens of their magic isn't going any smoother, either. Can't a girl just pursue her dream career without getting caught up in a mysterious destiny or playing a dangerous Sherlock-Moriarty game with her annoyingly hot nemesis?But when Ash accidentally crosses the cunning and deadly Queen of Hearts, ruler of the magic black market, all those cases may go unresolved.Permanently.With the clock ticking, it’ll take all of Ash’s intelligence to survive with her moral center–and her head–intact.The game is afoot and failure is not an option.
Review:
Got this from the KU Library.
At the start of this one Ash is trying to solve a murder at the Queen of Hearts behest but things are not as straightforward as they seem when it appears it was the Angel of Death who killed him and a magical artefact is sending anyone in its vicinity mad with their hearts desire. Add in the urge for her to find out more about her Jezebel magic and things aren't going great for Ash.
I do like this series. It's keeping me entertained with how Ash always seems to come to some amazing conclusion to all her issues and the cases that she's trying to solve. It's brilliant in that way.
Then there's the romance. I am really liking this slow burn that's going on between Ash and Levi. They've slept with each other a few times by the end of this one and feelings are very clearly starting to make themselves known. Ash doesn't seem to know what to do with them while Levi seems more open to the idea of a relationship with her. Excited to see where that bit goes next.
And then there's the issue of finding out more about Ash's Jezebel magic and bringing down the evil organisation that has been using Jezebel's to take magic from others and then selling it off to those without magic for the highest price. That's the main series arc and I am intrigued by who's behind it and just how Ash is supposed to stop it all.
Off to start book 3!
at Tuesday, February 09, 2021