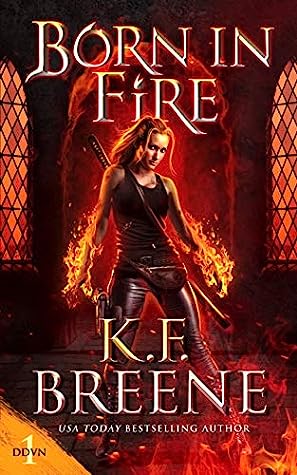 Book: Born In Fire
Author: K.F. Breene
Series: Fire & Ice Trilogy, #1, Demon Days, Vampire Nights, #1
Genres: Urban Fantasy, Paranormal, Vampires, Shapeshifters,
Format: Kindle e-Book - Kindle Unlimited
Publication Date: 18th February 2017
My Rating: 🌕🌕🌕🌕
Date Finished: 26th February 2021
Description:
Supernatural Bounty Hunter isn't the sort of thing you see on LinkedIn. But with a rare type of magic like mine, I don't have many options.So dangerous or not, the job is mine. And it was going fine, until an old as sin vampire stole my mark, and with it, my pay day.Knowing I'm poor and desperate, he has offered me a job. I'll have to work by his side to help solve a top secret case.Everyone knows not to trust vampires. Especially a hot elder vampire. But without any other jobs coming up, I'm stuck. As I uncover a web of lies and treachery, revealing an enemy I didn't know existed, the truth of my identity is threatened. I might make it out alive, only to end up in a gilded cage.
Review:
Got this from the KU Library.
It starts with Reagan out on the hunt for her target so she can earn money for her rent, etc. Only things don't go smoothly when her target is captured by vampires instead. She is then asked to join the vampires in a hunt for whoever is draining them of blood and using it for bad deeds. She ends up paired with Darius, the guy who stole her mark, a master vampire and he is tasked with keeping her safe as well as helping her solve the mystery.
I did enjoy this. There was the mystery surrounding Reagan's origins. She was very obviously not fully human but figuring just what she was took a while to be unravelled and I was enjoying waiting it out.
There was also the romantic "thing" she had going with Darius. It's a thing because Reagan has been very reluctant to let anything happen unless she's drunk or high on blood while Darius is quite open to the idea of sleeping with her and bonding her to him. I'm intrigued to see where that will go in this trilogy.
There were a few other elements that I was enjoying, too, like the two older mages who were friends with Reagan's mum and have now sort of started to tag along with her on jobs. Then there's the group of people in Reagan's neighbourhood who are a little shifty but are like a neighbourhood watch - telling her when anyone strange has been hanging around her house. Quirky.
I've already downloaded book 2, off to start it!
at Saturday, February 27, 2021