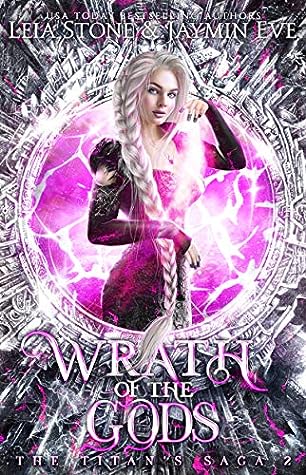 Book: Wrath of the Gods
Authors: Leia Stone & Jaymin Eve
Series: The Titan's Saga, #2
Genres: Urban Fantasy, Mythology, Romance
Format: Kindle e-Book - Kindle Unlimited
Publication Date: 30th April 2020
My Rating: 🌕🌕🌕
Date Finished: 10th January 2021
Description:
#NeverTrustATitanMaisey thought the worst thing to happen to her was Insta shaming or a midnight shift at the Crab Shack. Until she got dragged into the world of the gods.Or more specifically, the world of one very annoying, bad at sarcasm, sex on legs, Titan.Cronus was everything she never knew she wanted, or needed, in her life. And then he just left.Left her alone, with no idea what's happening to the world, what's happening with the sins.Only someone miscalculated. Whether it was Cronus or the fates, there's no way they can do this without Maisey.Turns out, she's the most important piece
Review:
I've borrowed this from the KU Library.
This starts a few months after the events of the last book. Maisey is trying to get on with life after being left by Cronus but it's hard to forget him when she fell hard for him in the time they were together and she's still wearing the necklace that holds some of the sins. When Hyperion comes back to get her so they can capture another sin, she's thrown straight back into the chaotic life of the Titans - and into Cronus' arms.
I did enjoy this one but not as much as the first. The relationship between Maisey and Cronus quickly went back to full throttle and I'll admit that I did get a little attached to them as a couple - so much so that I did have a few tears at the end. We meet more Titans -  a race of Gods I don't know much about, really, apart from the fact that they were the parents of the Greek ones - and see their powers in action as they try to bring the last five/six sins back under control and into the necklace that Maisey wears. I think Cronus and Hyperion are my favourite Gods in this series.
The #hashtags were once again used annoyingly a little too often throughout the book and I started ignoring them after a while. They weren't adding anything to the story for me.
I can't decide whether to read book 3 or not. It's the last book in the series and I'm hoping that Maisey and Cronus will have some sort of HEA but I also can't say I'm that interested in how this particular series is going to end... I don't know. I did struggle at times with this one, preferring to do other things than finish this, but like I've already mentioned I am a little invested in Maisey and Cronus. Gah! Undecided...
at Sunday, January 10, 2021