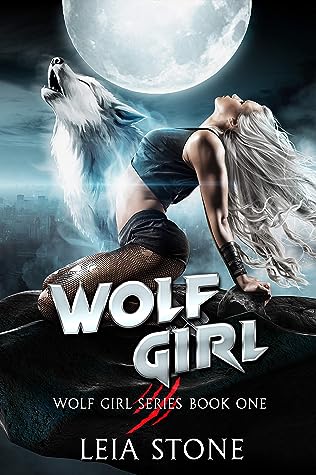 Book: Wolf Girl
Author: Leia Stone
Series: Wolf Girl, #1
Genres: Urban Fantasy, Romance, Shapeshifters, Paranormal
Format: Kindle e-Book - Kindle Unlimited
Publication Date: 27th December 2020
My Rating: 🌕🌕🌕🌜
Date Finished: 11th January 2021
Description:
When my parents were banished from Wolf City before I was born, I thought there was no way I would ever live in a pack again. Cuffed, with my shifter magic bound, I was forced to go to school with witches in order to keep my true nature from coming out.Then I met him.Sawyer Hudson.The Alpha's son was visiting Delphi Witches' College and spotted me. He took one look at me, and an hour later, I was being pulled out of school, taken into Wolf City and leaving my parents and everything I knew behind.It's the Alpha's son's selection year, the year he must pick a mate, and every female aged 18-22 must be in attendance.I've landed myself in the middle of Werewolf Bachelor, and just when I think I've got a handle on things, Sawyer releases my cuffs, unbinds my magic, and sees what I really am.The problem is, I don't know what this creature is that I transform into. It's not an ordinary werewolf, that's for damn sure.
Review:
I got this from the Kindle Unlimited library
This starts with Demi being picked on by her school class for being the only shapeshifter and her trapped wolf trying to break free causing her to leave the room at a run and heading outside where she lets out a howl of pure anger. Only she isn't alone, an attractive wolf shifter  - Sawyer - is behind her and invites her back to Wolf City - turns out he's the Alpha's son and will be Alpha very soon himself - and she goes with him, not expecting much, but finds herself included in a strange sort of real life The Bachelor type scenario.
I've never watched The Bachelor but i know the general idea for the show and this felt very similar. Although it was clear from early on that Sawyer is very much into Demi - more than any of the other girls, anyway. I liked how different it was in that way, I've never read a book that went along the lines of a dating show. It was kinda fun.
I actually really liked Sawyer. He wasn't the typical Alpha shifter. He could be very humble at times and was always considerate of what Demi wanted, unlike most other shifters you read about who are rather demanding and shove their thoughts and feelings onto others. I REALLY liked him!
Until that end bit! What was that all about? Doing a total 180 because of one strange thing that happened and then publicly declaring your marriage to someone else without talking about it? That totally knocked my rating down a full star because after everything that you'd done for each other, you do that to her?! It was totally out of left field.
Fair enough Demi thinks she's figured out whats happened but then it ended and I'm all up in the air. On one hand I was loving it up until that last chapter or so...
I need book 2 pronto so I can see what happens next with these two.
at Monday, January 11, 2021