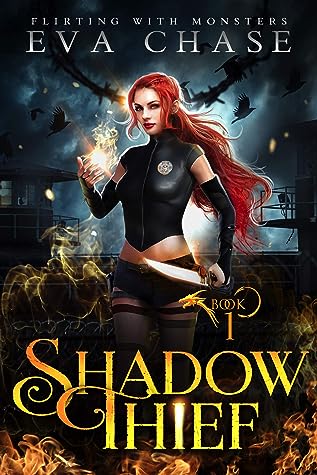 Book: Shadow Thief
Author: Eva Chase
Series: Flirting with Monsters, #1
Genres: Paranormal, Urban Fantasy, Reverse Harem
Format: Kindle e-Book - Kindle Unlimited
Publication Date: 22nd July 2020
My Rating: DNF @ 56%
Date Finished: 23rd January 2021
Description:
One sassy pyromaniac thief, three sexy-as-sin monsters, and a paranormal conspiracy of epic proportions.It was an ordinary job. Another night, another asshole collector of the supernatural. I free some poor little beasties from their cages, pocket a few trinkets to pay my bills, and burn the place down on my way out. Just call me the Robin Hood of monster emancipation.I didn’t count on three manly monsters following me home like lost puppies. Stunningly hot lost puppies, but still. Now I’ve got a seductively cheeky incubus, a sweetly enthusiastic demon, and a grimly stoic angel camped out in my kitchen. They’re determined to repay me for my help, and they won’t get out of my apartment until they’re satisfied we’re even.To be fair, they’ve got no place else to go. A covert band of hunters captured their boss, and the trail is ice-cold. I’ll lend a hand if it means I can send them packing… and when it looks like we’re up against the same creeps who murdered the person I loved most, you’d better believe I’m all in.Track down the baddies.Steal back the boss.Don’t get killed along the way.Oh, and maybe hook up with a monstrous hottie or two.Piece of cake.I’m so going to regret this.
Review:
I got this from Kindle Unlimited.
DNF @ 56%
This starts with Sorsha breaking into a big house where she knows the owner has a collection of creatures in his exhibition room. Shadow creatures that need dark to escape but are kept under blinding lights. Sorsha breaks them all out and is shocked the next morning to find three of them waiting in her kitchen wanting to do her a favour back for freeing them. They also seek her help in freeing their boss from the band of humans who took him - and possibly the same group who tried to take Sorcha's "aunt" many years ago.
I did struggle a little with this one right from the start. I never really got into the storyline but I decided to carry on, thinking the action at the start might continue throughout but it was few and far between.
The description had me intrigued and I don't mind reverse harem books but up to the point i got to (56%) Sorsha had only slept with one of the three demons - the incubus - and was secretly lusting after the other two while trying to hunt down the people who had taken the demons' boss but it was going so slowly... I was bored. I was finding other things to do; buying other kindle books, watching tv instead of being engrossed in this. It just wasn't working for me.
at Saturday, January 23, 2021