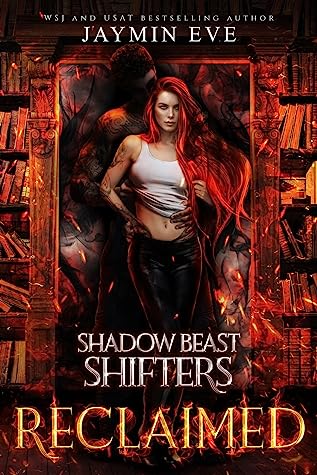 Book: Reclaimed
Author: Jaymin eve
Series: Shadow Beast Shifters, #2
Genres: Paranormal, Shapeshifters, Romance
Format: Kindle e-Book - Kindle Umlimited
Publication Date: 12th January 2021
My Rating: 🌕🌕🌕🌜
Date Finished: 18th January 2021
Description:
They all made a terrible mistake. One they will pay for.For the past ten years I’ve been a victim. A victim to my pack. A victim to my true mate, who rejected me in the most brutal of ways. And a victim to Shadow Beast, who used me for his own gains.Or did he?The beast of mystery never reveals his whole hand, but one thing is for sure… in my time with him, I've changed. Now I will no longer walk the path dictated by the powerful men in my life. Never again will I let my strength be taken from me.I must evolve or die.And we all know, with a choice like that, there’s really only one answer.
Review:
I picked this up from the Kindle Unlimited library on its release day because i was curious.
So it literally picks up where the last left off with Mera in a crazy going-to-kill-someone mood believing her friend had been murdered with the consent of Shadow. In her anger she once again draws from the Shadow World, bringing hundreds of shadow creatures across before panicking and trying to send them back. Shadow helps her cage them and then they have their argument, coming to an understanding before Angel rushes in, telling them the Shadow World's lock has been broken and they can now head inside so Shadow can claim his powers and his world.
So, yeah. I read it. I felt more interested in the romance between Mera and Shadow in this one. Their feelings grew a lot - or maybe i should say; they grew more comfortable around each other, enough to admit things when shit got bad at times. I will admit that I got invested in them. Without the pack and other distractions like the library, we focused more on Mera and what was happening in her head. She did grow on me quite a lot.
There were quite a few surprises thrown in towards the end involving Dannie and a few other things that I didn't entirely see coming and then the last chapter? Not a fan of what the author did with that but I guess she had to end it in a way that left the third book with a strong starter since the plotline from the start of this series was getting into Shadows World and him getting his powers back and that's all sorted now. I will probably read it when it comes out.
at Monday, January 18, 2021