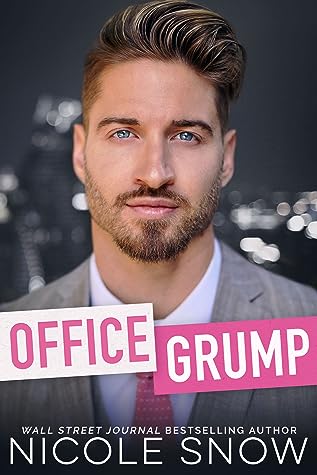 Book: Office Grump
Author: Nicole Snow
Series: Bad Chicago Bosses, #1
Genres: Enemies to Lovers, Romance
Format: Kindle e-Book - Kindle Unlimited
Publication Date: 13th November 2020
My Rating: 🌕🌕🌕🌕
Date Finished: 5th December 2021
Description:
My “interview” with bosshole supreme was anything but normal.He picked the worst day ever to chase me off my favorite park bench.I retaliated with a spray of cinnamon latte all over his Italian shoes.Then—for some unholy reason—Magnus Heron offered me a job.Even his name sounds like a piece of work.Guess what? He is.But when you're single, broke, and barely surviving in Chicago, you hop on the gift horse offering a six-figure salary and ride.I picked the stallion on a one-way trip to hell.It's not the impossibly long hours working under Grump-zilla.It's not the fact that he's snarly, demanding, horribly rich, and chiseled.It's not even the pesky way he makes me blush every flipping time we're together.Mag is my boss. I'm his lowly assistant. Some rules are carved in stone.That's my mantra until we're sharing a sunset too beautiful for life.Alone with wandering lips, whispered secrets, and disaster in the making.The plan was simple: punch the clock, get paid, and keep hating my boss.What's the blueprint when the office grump brings me to my knees?
Review:
This one starts with Sabrina late for work after missing her bus only to be told they're letting her go from her position due to "right-sizing" - her bosses term for down sizing - and she heads to her favourite coffee shop for a commiseration bear claw and cinnamon coffee that she consumes on her favourite park bench. Only she gets interrupted by the attractive but grumpy Magnus Heron who wants the bench for his work. Neither leaves the best impression on the other but it does linger and Magnus decides the feisty girl may just be the perfect person for his EA position. Sabrina grudgingly takes the job but as they get to know each other feelings begin to emerge between them.
This was a long book but I didn't mind that most of the time because I was enjoying reading Brina and Mag's romance slowly blossom. It did take a while for anything to happen - somewhere around the 35% mark - and then it was kicked to the background again for quite a while and i honestly do not blame Brina for telling him where to go several times for the way he treats her sometimes.
I did like this. It took a long time to get to that HEA but it was good reading - if i little too long in my opinion. It did make me cry towards the end, though, because i had come to care for these people and i wanted them to work out. I even grew to like teenage Jordan, whose emotions were up in the air like nobodies business after his mums mugging - which was understandable. He didn't know Magnus so to suddenly find yourself living with a billionaire you've never really met had to be hard.
I'm also intrigued by Brina's best friend and roommate - Paige, I think it was. Is she going to be getting her own book? She had about as much spark in her as Brina so it would be fun to see what guy ends up taming her.
at Wednesday, January 06, 2021