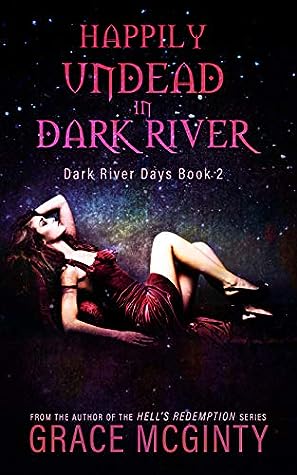 Book: Happily Undead in Dark River
Author: Grace McGinty
Series: Dark River Days, #2
Genres: Paranormal, Reverse Harem, Vampires, Shapeshifters, Erotica
Format: Kindle e-Book - Kindle Unlimited
Publication Date: 30th January 2020
My Rating: 🌕🌕
Date Finished: 2nd January 2021
Description:
There was no wake-up call quite like almost exsanguinating your main love interest while being compelled by your unhinged Maker.No longer hanging onto her past as Mika McKellen, human, Raine was determined to take her new life and live it at one hundred percent. She was no longer an unwilling victim. She was a badass vampire and the (slightly exhausted) lover of several supernatural hotties. She'd been through enough now, so she was ready for a happily-ever-after that was filled with love and rainbows and lots and lots of mind-blowing sex. Sure, there was still the looming threat of an investigation by the ruthless Vampire Nation, but she'd done nothing wrong.But when her long overdue, first real date with the sexy Sheriff is interrupted by someone bleeding on the floor of the diner, Raine began to wonder if there was even such a thing as happily-ever-after? It sure seemed like the Universe was mad she hadn't died in that ditch all those months ago.But no one was unlucky enough to die twice in one year, right?
Review:
I read the first book in this series a few months ago and really quite enjoyed it: Newly Undead in Dark River, so when I got my KU subscription and saw this was in the catalogue I decided to grab this one, too.
This one picks up not long after the events of the first with Raine now being persona non grata in Dark River apart from her four guys. It's going to take some time for the townspeople to come to terms with Raine being the victim of their well-loved, long-term resident (who I won't name.) It seems that what went down in their little town has drawn the attention of the Vampire Nation and they are on their way to investigate.
I did enjoy the first one, this one wasn't quite as engaging. I felt this one was getting a little too complicated with all the new lovers she was acquiring. Four men I can cope with - and have read several books with four males in reverse harems - but I think that at the end of this Raine was quickly verging on about 7 or 8 men that she would happily share her bed with and the others not be bothered about. It was getting a little ridiculous for me.
I can't say the storyline of this one pulled me into it, either. It was rather reminiscent of the first. Someone wants her dead, various attempts on her life and then saved by her guys - only the number of them has multiplied a little. There was quite a lot of sex in this, with various partners and combinations of men. It felt rather heavy on the erotica side of romance and I wasn't entirely convinced by the feelings floating around.
As much as I liked the first book I don't think I'll be continuing the series.
at Saturday, January 02, 2021