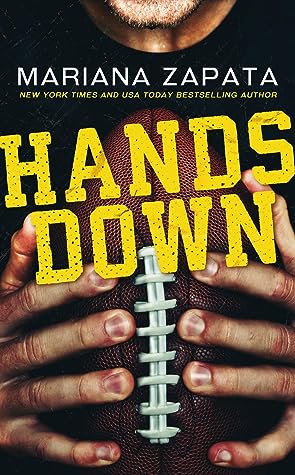 Book: Hands Down
Author: Marian Zapata
Genres: Romance, Sports, Contemprary
Format: Kindle e-Book - Kindle Unlimited
Publication Date: 2nd July 2020
My Rating: 🌕🌕🌕🌕
Date Finished: 15th January 2021
Description:
Before he was Big Texas, he was Zac the Snack Pack.Bianca Brannen knows time--mostly--heals all wounds. Including those your once loved ones might have unintentionally given you. (Those just take longer.)She thinks she’s ready when a call has her walking back into her old friend’s life. Or at least as prepared as possible to see the starting quarterback in the National Football Organization. Before the lights, the fans, and the millions, he’d been a skinny kid with a heart of gold.Waltzing out of Zac Travis’s life should be easy. Just as easy as he walked out of hers.
Review:
Borrowed this from the Kindle Unlimited Library.
This starts with Bianca at work and taking a call from her cousin who asks her to go and get NFO star and his best friend Zac, since they haven't been able to get hold of him to tell him that his Paw-Paw has been admitted to hospital. It's been about ten years since Bianca last saw Zac, her teenage crush, and is reluctant to see him again but because she loves her cousin like a brother, she agrees to go see Zac and let him know what's happened. Before she realises it, Zac is a major part of her life again and the friendship they used to have has come back into full force. Only those pesky feelings she used to have for him haven't completely disappeared.
Mariana Zapata is the Queen of slow burn romances. You only ever see the woman's POV in her books and have to read the body language of the males to figure out what they're thinking and I think she is brilliant at it. Zac's facial expressions in this gave a lot away about how he was feeling but it still took somewhere around the 90% mark for the words to be spoken - the "I love you"s.
Her books are always long - I've pointed out several times I'm not the biggest fan of long books - but most of the time you don't even realise it because you're so engrossed in the story. The same could be said of this one although I did find Bianca a bit annoying at times with her persistent belief that Zac was only hanging around because he felt guilty for losing touch with her when he made sure she was there for everything and always wanted to hang out with her. I did feel like giving her a slap every now and then because it was pretty obvious he cared about you, you donut!
I also love how she writes the characters from her previous books into her latest. We see several of them in this one including characters from From Lukov with Love and The Wall of Winnipeg and Me and even DeMaio House gym plays a vital part in this book.
P.S. I can't help feeling like we've met Enzo somewhere before...?
at Friday, January 15, 2021