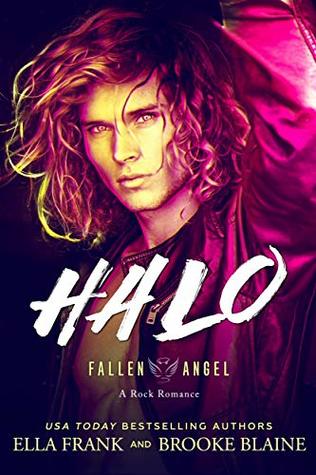 Book: Halo
Authors: Ella Frank & Brooke Blaine
Series: Fallen Angel, #1
Genres: MM Romance, Musicians/Rockstars
Format: Kindle e-Book - Kindle Unlimited
Publication Date: 23rd February 2019
My Rating: 🌕🌕🌕🌕
Date Finished: 20th January 2021
Description:
Massive world tours. Over a hundred million albums sold. Groupies galore.Every day is a party for Viper and the guys of TBD, the biggest rock band in the world. But it all comes to a screeching halt when the lead singer walks out of the studio one day and never comes back.Ear-blistering vocals. Butchered lyrics. Fame chasers.After months of lackluster auditions, Viper, the lead guitarist and resident bad boy of the group, is ready to find solace in the bottom of a bottle. Time’s running out and the pressure’s on to find a new singer, but it isn’t until an angel walks through the door that the band’s prayers are answered.Charismatic. Talented. Magic behind the mic. Halo is everything they’ve been looking for.With a voice to match his stunning good looks, it isn’t long before Viper’s taking notice. But there are several reasons this is a bad idea:1. Interpersonal relationships in the band are discouraged
2. Viper has already broken rule #1—big mistake3. Halo is straight
Too bad Viper’s body isn’t listening to his head—at least not the one on his shoulders. But you can’t fake chemistry, not onstage and certainly not off it, and Viper and Halo? They have it in spades.As both men try to resist the fire blazing between them, and the band is forced to reinvent themselves, it’ll be a complicated rise back to the top. But from the ashes of what was, something beautiful is born. Something better. And when the world finally sees Halo stretch his wings, they’ll discover what it’s like to fall for an angel.
Review:
I got this from the Kindle Unlimited library after being a bit of a geek and going through the story on Chapters - the interactive story app? - and getting intrigued by these two guys and how their relationship would progress.
This starts with the successful rock band TBD looking for another front-man after their old one walked out several months ago and never came back. In walks Halo, a talented guy with the voice they're looking for and decide to make him their frontman. Viper, an original member of TBD, feels an intense attraction to Halo from the moment he walks in the room and it only grows when he hears him sing - the only issue is Halo claims he's straight.
Since I'd read through the story on Chapters, I pretty much knew everything that was going to happen although in the app we only see Halo's POV and in this book we get alternating POV's between both Halo and Viper and i thought it was great to see what was going on in Viper's head.
I love the progression of this thing that sparks between them and Viper's innuendo and single mindedness when it comes to wanting to get in Halo's pants. That's why I've called it a thing because Viper isn't exactly the romantic type but the care and attention he's shown Halo makes me believe he truly cares about him and I cannot wait to read the next book to see where their relationship goes next.
at Wednesday, January 20, 2021