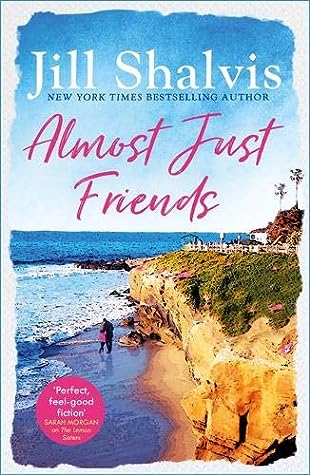 Book: Almost Just Friends
Author: Jill Shalvis
Series: Wildstone, #4
Genres: Romance, Contemporary
Format: Paperback
Publication Date: 21st January 2020
My Rating: 🌕🌕🌕🌜
Date Finished: 20th January 2021
Description:
Piper Manning’s about as tough as they come, she’s had to be. She raised her siblings and they’ve thankfully flown the coop. All she has to do is finish fixing up the lake house her grandparents left her, sell it, and then she’s free.When a massive storm hits, she runs into a tall, dark and brooding stranger, Camden Reid. There’s a spark there, one that shocks her. Surprising her further, her sister and brother return, each of them holding their own secrets. The smart move would be for Piper to ignore them all but Cam unleashes emotions deep inside of her that she can’t deny, making her yearn for something she doesn’t understand. And her siblings…well, they need each other.Only when the secrets come out, it changes everything Piper thinks she knows about her family, herself…and Cam. Can she find a way to outrun the demons? The answer is closer than she thinks—just as the new life she craves may have already begun.
Review:
3.75 stars.It's taken me a long time to finish this, mainly because other books on my Kindle were taking up all my attention and being a bit more angsty and action-packed than this one, but once I sat down and concentrated on this fully I got it finished in a handful of hours.
I grabbed this paperback from my favourite bargain bookshop: The Works for £2. I've had a taste of Jill's books and I do enjoy them so when I saw this, I decided to buy it.
It tells the story of Piper who's just celebrating - or rather not celebrating - her 30th birthday with friends at the local bar when she meets Camden, her next door neighbours oldest son. They flirt a little but shy away from anything happening between them initially but as they spend more time together, they start to care about each other.
This doesn't just focus on Piper, we also have her siblings' viewpoints, too.
Gavin, an ex trouble maker, has come back for various reasons and one of them is his love for CJ - the man he hurt several years ago. We see their re-connection and it is quite lovely actually.
Winnie, the youngest, has come back from college and wants to help Piper fix up the place so they can all live together happily - only she's got a secret of her own, that her brother and a handful of others know about but not Piper. Yet.
This is a story of family and love, grief and forgiveness. It's heartwarming at time and others I felt a little prick of tears as they tried to deal with their issues. I thought it was really well written.
There was one scene I really loved that was near the end with Camden and Piper when she tells him to throw her journal in the lake and then has a panic when he actually does it before jumping in the lake despite her fear of water to try and rescue the bloody thing.
at Wednesday, January 20, 2021