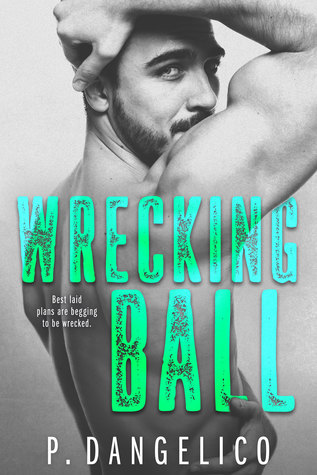 Book: Wrecking Ball
Author: P. Dangelico
Series: Hard to Love, #1
Genres: Sports, Contemporary, Romance
Format: Kindle e-Book
Publication Date: 9th October 2017
My Rating: 🌕🌕🌕🌕
Date Finished: 9th December 2020
Description:
Cam DeSantis’ life is a mess. How else would you describe losing your husband, your job, and your money all at once? Desperate times call for desperate measures. So when salvation comes in the form of one intolerable jerk, she has no choice but to accept his offer as a nanny for his eight year old nephew. Now all she has to do is find a way to ignore him for the next three months. Which is easier said than done.NFL quarterback Calvin Shaw has zero interest in women. It’s not that he doesn’t like women. In fact, he loves women. He just doesn’t want anything to do with them. What he needs to do is focus on winning another Super Bowl before he retires. Problem is, the woman living in his house is a major distraction. And he doesn’t know what’s worse, that he promised to be civil, or that he’s attracted to her.Best laid plans are going to get wrecked when a reclusive football star is forced to live with a reluctant nanny.
Review:
This starts with Camilla in court (i think?) as she is told she has lost everything she owns after her dead husband started a ponzi scheme that lost a lot of people a lot of money. She is public enemy number one and nobody wants to hire her so she ends up living with her parents and going through agencies in the hopes of finding a job. She's finally offered one looking after a young boy who has a celebrity uncle and must live with them for the duration of the contract. Sparks fly between Cam and Calvin from the start but as they grow closer, animosity turns to attraction.
I actually really enjoyed this. It was definitely a slow burn romance but you could see there was a spark there from pretty early on. Probably from when Cal turned up at her evening job asking her to take the nanny job and wanting to drive her home afterwards since it was so late. That there put him down as being a gentleman in my books and I was smitten. I devoured it from that point on, willing them to finally do something about their attraction.
Of course, there's the dilemma that tears our couple apart and even I was getting emotional at that part. Geez, they were so good together and something like that was going to end up tearing them apart. All came right in the end, though, thank God, or I would be an emotional wreck right now.
I may have to read the next book in the series because it focuses on Cam's best friend and apparent man-hater, Amber, so that should be fun.
at Wednesday, December 09, 2020