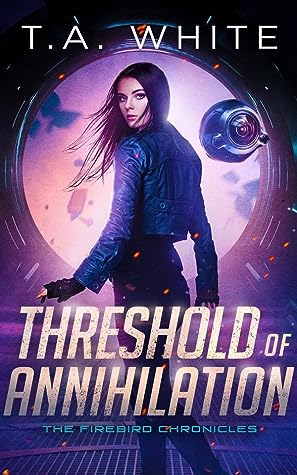 Book: Threshold of Annihilation
Author: T.A. White
Series: The Firebird Chronicles, #3
Genres: Sci Fi, Romance, Action
Format: Kindle e-Book
Publication Date: 15th December 2020
My Rating: 🌕🌕🌕🌕
Date Finished: 19th December 2020
Description:
When her most closely guarded secrets are laid bare, how will Kira survive the inevitable fall out—and will anybody be standing beside her in the end?Traveling to the planet of Jettie in the hopes of finding safe harbor for her niece, Kira arrives only to find their destination host to the quorum—a series of dangerous contests that hold the power to decide the fate of empires.With little choice but to participate, it doesn’t take long for Kira to find herself knee deep in enemies. Surrounded on all sides, Kira will have to face her worst fear. Trusting others with the truth.Because it’s becoming clear the tsavitee are no longer content to exist in the shadows. War is coming—and everything Kira thought she once knew is about to change.
Review:
So this one kicks off where the last finished once more with Kira leaving the Roake planet in her space ship thanks to a certain visitor - another secret come to light! Kira hadn't wanted to leave the planet but now that she has, she has other priorities like the stowaway on her ship who she decides to take home. Only the planet she lives on is holding an alien race forum and only registered inhabitants can land during that time causing for creative measures to get there.
Secrets and lies once more! I've been blindsided again with this one. Even more secrets come out of the woodwork including things about Elise. I have no idea how the author managed to find more things to surprise us with but they did.
I do love the relationship progressions in this series and not just between Kira and Graydon. Things between Kira and Raider have changed a lot over the last three books - they started off as hate and distrust on Raider's side, really, and are now more like the close friends they used to be (I loved the slap fight they had at one point!). Her relationship with Finn has evolved a lot, too. He's now a trusted friend and a kick-arse one at that. Most of Graydon's oshota have become embedded in Kira's hard shell. And then there's Graydon; thing's progressed more with him in this one. He's made it known that he wants her and will do anything to protect her.
I'm hoping the next book is going to be the last because thing's have been brewing for a while now with the Tsavitee and I'm not sure I can take much more of them causing fights on planets and then running off like cowards before doing it again. I want them to suffer and die out fir all the pain and suffering they've caused Kira and the Curs and everyone else.
I will be waiting impatiently for the next book to come out next year.
at Sunday, December 20, 2020