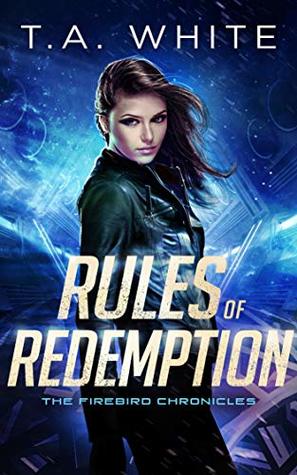 Book: Rules of Redemption
Author: T.A. White
Series: The Firebird Chronicles, #1
Genres: Sci-Fi, Romance, Action
Format: Kindle e-Book
Publication Date: 7th March 2019
My Rating: 🌕🌕🌕🌕
Date Finished: 13th December 2020
Description:
The war everyone thought was over is just beginning.Kira Forrest is a survivor. She’s risen above the pain of her beginnings to become a war hero only to leave it all behind in the pursuit of a simple life. Now a salvager, she makes a living sifting through the wreckage of dead alien ships from a war that nearly brought humanity to its knees.After her ship takes damage, she’s forced to re-route to a space station where her past and present collide with dangerous consequences.Kira’s existence holds the key to a faltering peace treaty with the Tuann—a technologically advanced alien race who dislikes and distrusts all humans. Winning her freedom should be easy, but a powerful and relentless Tuann warrior stands in her way. Deceiving him seems impossible, especially when he strays dangerously close to secrets she struggles to hide.Can Kira reconcile the pain of her past with the possibilities of her future? The fate of two races depends on her success.
Review:
This starts with Kira trying to get to one of her enemies destroyed ships so she can salvage parts and other things from it, making her way through a field of broken ship parts to get there. She finally makes it on board and salvages several parts but not without incident, heading back to her ship to find out something is now broken and they need to head to a station to buy the part. While there she comes to the rescue of some children and draws the attention of the Tuann, a race of beings who claim she is one of them. She is coerced into going with them to one of their planets by the leader of the group, Graydon, and lots of things come to light - including an intense attraction.
I actually got quite into this, more than i expected to considering sci-fi is not really my type of thing. Loads of stuff kept happening and kept me entertained. Secrets came to light, a romance was blooming, people thought dead were coming back out of the woodwork...
It was really well thought out and written and we learnt things about Kira in dribs and drabs that kept us guessing about her and what happened in her past until we learnt even more. It was great. The ending had me intrigued enough to go and buy book 2 straight away.
I'll admit that the above is mostly down to the romance that was slowly brewing between Kira and Graydon and the little fact that he's not letting her leave - which I find quite funny, because Kira was ready for killing him about it, and because I am excited to see what happens there romantically.
Off to read book 2!
at Monday, December 14, 2020