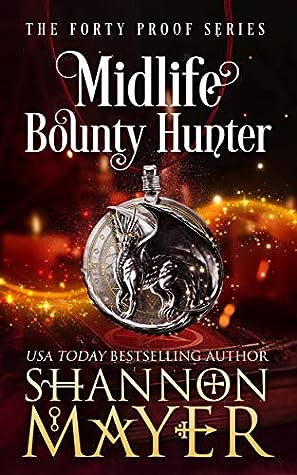 Book: Midlife Bounty Hunter AKA Grave Magic Bounty
Author: Shannon Mayer
Series: Forty Proof, #1
Genres: Urban Fantasy
Format: Kindle e-Book
Publication Date: 26th March 2020
My Rating: 🌕🌕🌕
Date Finished: 3rd December 2020
Description:
One day I’m married, living in Seattle, and magic isn’t real.The next, I’m divorced and living in the guest room of my ex’s hotter- than-sin cousin’s place in Savannah . . . and talking to an animated skeleton named Robert.I have to admit, Robert isn’t my worst date.At forty-one, I didn’t think I’d be starting over. But I’ll be damned if my ex thinks I’m down and out because he pulled a fast one on me.When a job comes my way that offers me a chance to use my childhood training in the shadow world, I take it—I need the money more than I care about my sanity.It’s dangerous.I have to embrace the magic and dark of my past.And I need Advil to keep me going.So those who’d hold me back better sit up and take notice, because a new woman is in town, and she’s not about to be counted out by anyone.Even if she does groan when she rolls out of bed in the morning.
Review:
I've read a few books in the past by this author and enjoyed them, so I'm hoping this one plays out the same way.
It starts with Breena heading to a graveyard where she's supposed to be attending an interview but things take a decidedly paranormal turn when she meets a skeleton and is chased by a werewolf up a steep come-out-of-nowhere mountain where she finds out she's passed the interview and is now working for a group who do bounty work for the supernatural community.
I did enjoy this but I wasn't fully invested in it. The most exciting thing for me was Crash...and Breena trying to get her house back, but mainly Crash. There was just something about him that drew my attention and intrigued me. Him, I would like to see more of. The rest of the gang...meh. They didn't grow on me that much and I didn't feel like I grew to know them that well.
I feel I should mention Robert and Feish, too. They were the closest people - loosely used term - to Breena in this and they were pretty likeable in this one. I'm sure she'll grow closer to them over the course of the series and they'll turn into valuable allies.
One thing I wasn't a fan of: the continuous referral of her ex husband as "Himself" rather annoying after a while. Why not just "Him" or his name or even "ex"?  He does sound like a piece of work, though, and I feel like seeing him get his comeuppance is going to be good.
at Thursday, December 03, 2020