All About the Hype - Paige Toon 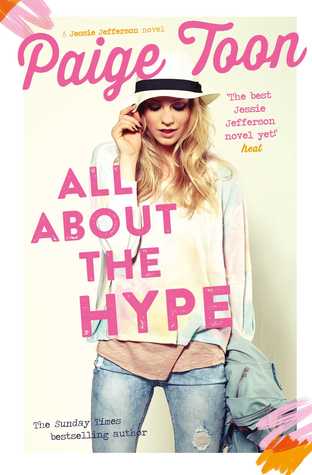 Book: All About the Hype
Author: Paige Toon
Series: Jessie Jefferson, #3
Genres: Young Adult
Format: Kindle e-Book
Publication Date: 28th July 2016
My Rating: 🌕🌕🌕
Date Finished: 21st December 2020
Description:
Is the life of a famous rockstar's daughter all it's cracked up to be? And what about dating your fellow band-member just as you hit the bigtime?
Jessie is still getting used to being a celebrity, and the daughter of one of the world’s biggest rock stars. With her own music career on the rise, a gorgeous love interest and a fun group of friends, it seems Jessie’s glamorous LA life couldn’t get any better . . . but things are about to get really complicated.
Review:
So I'll be honest and say that I've forgotten a lot of what went on in the two previous books in this series but this starts with Jessie waking up on her sixteenth birthday, crying since it's also the anniversary of her mothers death, too. Her dad, Johnny Jefferson - famous rockstar, has a surprise gift for her of a trip to Disneyland with the rest of the family and one there, all her old school friends and the ones she's made while being in America turn up and they spend the day there. That same night, they throw a party for her and Johnny sings one of her bands songs sending their fame skyrocketing.
I feel i should mention my love of Johnny and Meg. I read their book, Johnny Be Good, years ago now and fell in love with them as a couple and then their second book, Baby Be Mine, tore my heart out a little with all the emotion it made me feel but they did get their HEA - although their story is also continuing through this series, too, and I think it came to a bit of a head in this one with the return of Dana.
As for Jessie, I didn't remember everything that happened in the previous books but my review of the last book on Goodreads threw some light on my feelings. I was a little torn in my feelings again, though, with Tom and Jack. It was like one minute Jack was being an arse and i wanted her to get back with Tom, and then the next Tom was shoving something in her face and I was happy for her to be with Jack. So confusing.
And also her band All Hype and their journey. It was cute to watch them slowly find success with the aid of Johnny when he thought they needed it. It was nice to read.
I will admit that I wasn't full invested in this story. Maybe it was the length of time I've left between books - about 3 years - but I was just waiting for the book to finish. That sounds harsh but I felt like I'd missed something.
at Monday, December 21, 2020