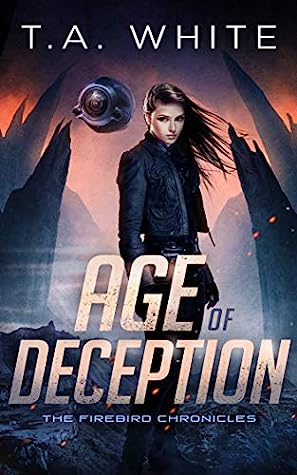 Book: Age of Deception
Author: T.A. White
Series: The Firebird Chronicles, #2
Genres: Sci-fi, Romance, Action
Format: Kindle e-Book
Publication Date: 5th February 2020
My Rating: 🌕🌕🌕🌕
Date Finished: 16th December 2020
Description:
War hero and daughter to two Houses, Kira is just beginning to learn how deep the rabbit hole goes.Agreeing to accompany her father’s people back to their homeworld, Kira Forrest prepares for the fight of her life. She’s agreed to undertake the Trial of the Broken, a rite of passage every member of her father’s House must pass. It offers a path to independence and freedom that is too tempting to deny.Not everyone welcomes this lost daughter of Roake. There are those who fear what her presence might bring to light. Betrayal stalks the halls of Kira’s birthplace—its roots embedded deep in the events that claimed her parent’s lives and set her on her current path.Walking the wire’s edge between truth and deception will test the person Kira has become as she separates ally from betrayer. An old enemy has put into motion a plan that could topple the balance of power in the universe. Letting them succeed spells doom—but the price might be more than Kira is willing to pay.
Review:
This literally picks up where the last book left off with Kira facing off against Graydon, her cousin and two unknown Tuann, who appear to be from her fathers house. She's once more manipulated into going to another of their planets. Once there, she undergoes training to pass their tests and learns more about her past and her family. She also grows closer to a certain man mountain, Graydon.
I got pulled into this one, too. Once again there was continuous action of one kind or another. More secrets and lies came out of the woodwork - I don't know how the author manages it! You'd think we'd have everything we needed to know, but nope, more stuff keeps coming out and punching us in the face. Just like that bit at the end!
I'm loving the progression of Kira and Graydon's relationship. They love to fight each other in their friendly-but-will-actually-hit-each-other sparring sessions. I think it's their version of flirting! They have definitely grown closer in this one and we have quite a lot more kissing happening. Woohoo!
It has left it on a bit of a cliffhanger again but luckily the third book was released - like 2 days ago! - so i went and bought it so i could see where this series is going next with that little shock thrown in in the last chapter.
Off to read book 3!
at Thursday, December 17, 2020