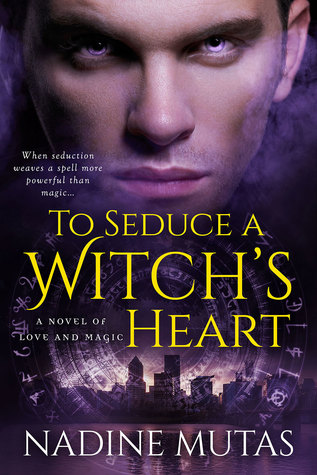 Desperate to save her demon-abducted sister, witch Merle MacKenna breaks the law when she summons Rhun, another demon, from the magical prison of the Shadows. Rhun might be a demon, but he'll be able to help her, and then she'll bind him when she's through – at least, that's the plan. But Merle finds it's easier said than done when her new demon is hellbent on charming his way into her pants – and her heart.

After twenty years in the Shadows, bound for a crime he didn't commit, Rhun is past caring about anyone but himself. The plan: seduce the sexy witch, steal her powers, and be on his merry way. But when a heinous betrayal in the ranks of the witches forces Merle and Rhun to work even closer together, Rhun's plan backfires – and the witch gets under his skin. With his unbidden feelings for Merle vying with his need for freedom, he struggles with a new torment: Being a selfish jerk is a lot harder when love is involved.

Warning: Includes lots of witty banter and snarky humor, as well as a charmingly disrespectful demon hero who's hot enough to melt panties with a look.
Review:
I've avoided paranormal romances for quite a while as I don't always want the romance to be the main part of my paranormal reads. This one, however, focused more on the romance between our witch, Merle, and our demon, Rhun. Note: I didn't realise this was a paranormal romance when I downloaded it.
It starts with Merle summoning Rhun from the Shadows - a land full of shadows, obviously - where he has been kept prisoner for the last twenty years. He comes back starving for the three things his demon needs - pleasure, pain and blood. He's very good at the charm and persuades Merle to give him two of three before finding out why she'd summoned him. Her sister, Maeve, has been taken by another demon of his kind and she is frantic to find her as she is the only remaining relative of hers.
I liked that the sexual tension between our characters happened from pretty much the first chapter. It was instant physical attraction but done well, in my opinion. He was just using her, initially, to get his powers back and she wasn't willing to let him go after anyone else when she'd been the one to summon him and feelings began to emerge the more they got to know each other/spent time together.
I did feel like the book was a tad overly long. They spent more time in bed together than they did searching for her sister - which made me get a little fed up at times, and also why it's taken me about a week to read this. Don't get me wrong, though. I did enjoy the interactions between our two characters. They had a lovely camaraderie once they got to know each other and I grew to really like them both.
Considering how I wasn't entirely invested in the story, I found myself getting a little emotional towards the end of this. I actually shed a tear when Rhun was forced back into the Shadows. It was so unfair. Of course, it would be a crappy ending to the book if they didn't get their HEA and of course they do (thank God!).
at Sunday, November 15, 2020