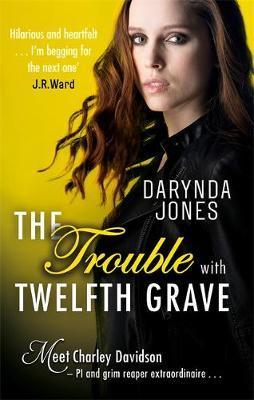 Book: The Trouble with Twelfth Grave
Author: Darynda Jones
Series: Charley Davidson, #12
Genres: Urban Fantasy, Romance
Format: Paperback
Publication Date: 5th October 2017
My Rating: 🌕🌕🌕🌕🌜
Date Finished: 25th November 2020
Description:
Ever since Reyes escaped from a hell dimension in which Charley accidently trapped him, the son of Satan has been brimstone-bent on destroying the world his heavenly Brother created. His volatile tendencies have put Charley in a bit of a pickle. But that’s not the only briny vegetable on her plate. While trying to domesticate the feral being that used to be her husband, she also has to deal with her everyday life of annoying all manner of beings—some corporeal, some not so much—as she struggles to right the wrongs of society. Only this time she’s not uncovering a murder. This time she’s covering one up.

Add to that her new occupation of keeping a startup PI venture—the indomitable mystery-solving team of Amber Kowalski and Quentin Rutherford—out of trouble and dealing with the Vatican’s inquiries into her beloved daughter, and Charley is on the brink of throwing in the towel and becoming a professional shopper. Or possibly a live mannequin. But when someone starts attacking humans who are sensitive to the supernatural world, Charley knows it’s time to let loose her razor sharp claws. Then again, her number one suspect is the dark entity she’s loved for centuries. So the question becomes, can she tame the unruly beast before it destroys everything she’s worked so hard to protect?
Review:
I finished book 11, Eleventh Grave in Moonlight, in September and decided that I had to have the last book before I started book 12 just so I could finish the series all at once. I now have it so here goes.
This starts with Charley at a client's house as she tells the whole ordeal of the past three days (since the events of the last book) to the little old lady beside her who thinks her house is haunted. Ever since Reyes went into the God glass in the last book and spent what could have been days in there before coming back out as Rey'azikeen, there have been deaths in the Albuquerque area - deaths that point to him as the culprit. Charley finally gets the gang together to tell them what happened and they try to come up with a plan to find out if it was Reyes and how to stop him or Michael and the angels will come to take him out.
As usual, this book is filled to the brim with Charley Davidson craziness. I absolutely love her but she is totally bonkers at times. She has an unusual way of thinking but it seems to always go her way anyway. It's ridiculous but so much of why I love this series. It is simply amazing. I can't recommend this series enough!
The books in this series are fairly short but the author manages to pack a lot into them. We had a murder investigation, a breaking and entering, some sexy times, a mob family, some creepy sounding wraiths and quite a lot more too. I can't go into too much detail as it will spoil it for everyone.
I do love the characters in this. Charley and Reyes have grown a lot over the last eleven books and I'm waiting with baited breath to start the last book to see where the series has been building up to after all this time. Off to start book 13!
at Wednesday, November 25, 2020