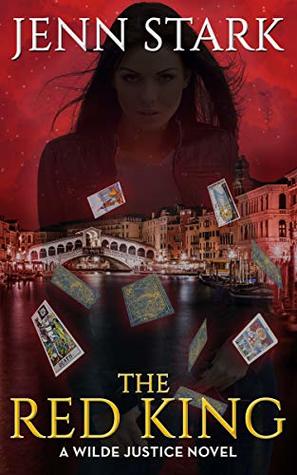 As the first Justice of the Arcana Council in two hundred years, Tarot-reading Sara Wilde is tasked with taking out the most dangerous magic-wielding criminals on the planet. Her first assignment? A killer known only as the Red King, who's systematically picking off the world's most gifted magicians in the rollicking streets and storied canals of Venice, Italy, on the eve of Carnevale.

Amidst the festival's music, masks, and brightly colored costumes, Sara must unravel the truth about a brutal murderer from Venice's own murky past, navigate the twisting political currents of magicians who seek to rival her own Council, and keep one costume change ahead of a conjurer whose lethal spells could end Justice--permanently. Good thing the diabolically sexy and deeply powerful Magician of the Arcana Council has Sara's back...if only he didn't hold so much of her heart as well.

The canals of Venice will run with blood when you deal in The Red King.
Review:
I picked this up free at the beginning of the year after reading this authors entire Immortal Vegas series pretty much back to back. It contains the same set of characters but now Sara Wilde is part of the Arcana Council herself and is solving mysteries, instead of hunting for artefacts.
This one starts with Sara chasing someone up a mountain who's been selling technoceuticals to minors and has been marked for Justice. It's after he's been sent to be judged that whispers of the Red King begin to surface. A tale of a butcher in Venice who used to be renown for his stews until something was found in them that caused him to be hunted down and killed. Now it appears he's back from the dead and using the Venice Carnivale as a hunting ground and Sara is sent in to investigate.
I don't know about this one. I liked being back in the world of Sara and the Arcana Council. I enjoyed seeing more of the Devil and the Magician but there wasn't enough action to keep my entertained. I've been reading this nearly a week and there isn't even 250 pages in this.
I loved the descriptions of Carnivale and I'd love to visit Venice during that time but the mystery of who the Red King was and what his plan was just wasn't grabbing my attention. I think I preferred Sara hunting down the artefacts in the previous series. I think it was just more action packed and the tension between Sara and the Magician and the whole will they/won't they get together.
I will probably continue this series at a later date just because I still really like Sara and the Magician's relationship and the Devil who always pops up at just the right time/gives enough information away to help her.
at Friday, November 06, 2020