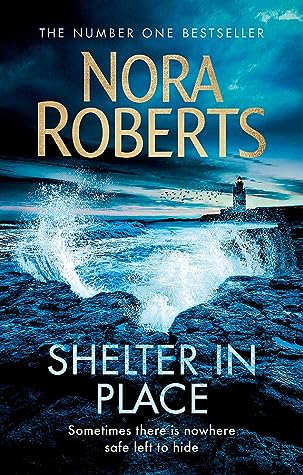 Book: Shelter In Place
Author: Nora Roberts
Genres: Romantic Suspense
Format: Paperback
Publication Date: 23rd April 2019
My Rating: 🌕🌕
Date Finished: 20th November 2020
Description:
It was a typical evening at a mall outside Portland, Maine. Three teenage friends waited for the movie to start. A boy flirted with the girl selling sunglasses. Mothers and children shopped together, and the manager at video game store tended to customers. Then the shooters arrived.

The chaos and carnage lasted only eight minutes before the killers were taken down. But for those who lived through it, the effects would last forever. In the years that followed, one would dedicate himself to a law enforcement career. Another would close herself off, trying to bury the memory of huddling in a ladies' room, helplessly clutching her cell phone--until she finally found a way to pour her emotions into her art.

But one person wasn't satisfied with the shockingly high death toll at the DownEast Mall. And as the survivors slowly heal, find shelter, and rebuild, they will discover that another conspirator is lying in wait--and this time, there might be nowhere safe to hide.
Review:
I bought two chucky paperbacks by Nora Roberts at the same time a few months ago, this and Come Sundown.
This one starts with Simone and her two friends going to the cinema to watch a film together. Simone goes to the toilet and minutes later hears screams and gunshots coming from the room she'd just left. She phones the police as three people go through the mall, killing as many people as they can. Simultaneously, Reed is working at one of the restaurants in the mall and as the shooters begin their killing spree he comes to the rescue of a little boy who's crying for his mum and keeps him safe until the cops arrive and take out the shooters.
Fast forward several years and survivors of the attack start to be killed off one by one and it seems Simone and Reed are on the killers list.
I will start by saying that romantic suspense's are not my favourite genre. It has taken me about a month and a half to finish this. The romance definitely felt like an afterthought since it only kicked in about the half way point by which point I was just reading to see them take down the bad guy - whose POV we saw regularly throughout - and whose comeuppance felt like a bit of a disappointment. It all happened within about five pages from them making themselves known to Simone to them being incapacitated.
It's a 500+ page book! The first half was the two main survivors growing up and finding their calling in life - and I was rather bored, hence it taking me over a month to read! - the second half was a really played down romance while the killer made their way through the rest of the survivors on their meandering journey to them on Tranquillity Island.
I normally really enjoy reading Nora Roberts' books but I think I'll stick to her traditional romances and away from romantic suspense's in the future. Come Sundown and this one will be making there way to a charity shop for others to enjoy.
at Friday, November 20, 2020