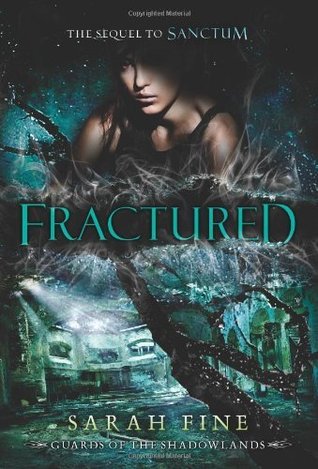 Book: Fractured
Author: Sarah Fine
Series: Guards of the Shadowlands, #2
Genres: Young Adult, Paranormal, Urban Fantasy, Romance
Format: Kindle e-Book
Publication Date: 29th October 2013
My Rating: 🌕🌕🌕🌕
Date Finished: 1st October 2020
Description:
In the week since Lela returned to Rhode Island as Captain of the Guard with Malachi as her second in command, local news has been dominated by chilling sightings of human-like creatures running on all fours. Lela knows there’s only one explanation: the Mazikin have arrived in the land of the living.

Needing to maintain the appearance of a normal life for her foster mother, her probation officer, and her classmates, Lela returns to Warwick High along with Malachi. At night they secretly hunt for the Mazikin nest. To assist, two new Guards from very different parts of the Shadowlands are assigned to Lela’s unit, including the bad boy Jim, who repeatedly challenges Lela's authority. Lela struggles to keep all her Guards on the right side of the law, but their mistakes come at a terrible cost.

As one painful revelation follows another and the Mazikin start targeting those closest to her, Lela finds herself more vulnerable than she’s ever been, wanting a future more than she ever has. With an enemy determined to separate soul from body, one question remains: how much is she willing to sacrifice to protect those she loves?
Review:
It's been a long time since I read the first book in the series - 2016 to be exact - and I'll be honest, I'd forgotten a lot of what happened in it but the more I read of this the more I remembered bits and pieces.
This starts with Lela and Malachi attending school and hearing about a sighting of a creature running on all fours and attacking humans. They think it's the Mazikin that escaped the shadowlands, trying to get more of themselves into the human realm to take over. Lela and her new crew of guards must do their best to stop the Mazikin before their ranks get too strong.
Like I mentioned above I didn't remember that much but I did fall back into this series quite quickly.  I grew to like the new characters of the guard and the school friends of Lela's, though not all of them. The school drama was a little annoying at times but it did play quite a big part in the storyline.
I was quickly invested in the story. I wanted Lela and Malachi to be together and still do their jobs to the best of their ability. I wanted Jim and Henry to be as good at their jobs as they were back in their own realms. I wanted them to stop the Mazikin from causing havoc. I wanted to know what the Mazikin actually wanted.
All was revealed in this and God, did it mess with me emotionally a few times. I was cheering them on at one point, wanting to bang their heads together the next. It did end on a bit of a cliffhanger/major plot point so of course I jumped straight into book 3, Chaos - the third and final book in the series.
at Friday, October 02, 2020