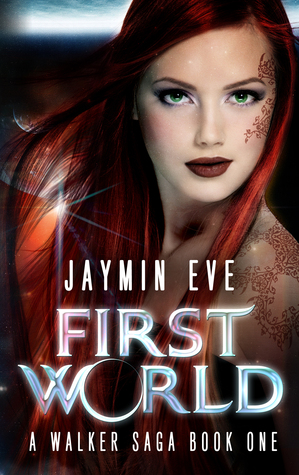 Abigail Swish might not love her life, living in gang-ridden New York in 2035 and training to fight and survive with Compound 23. But she is grateful for a few things, especially her no-filter-between-brain-and-mouth best friend Lucy and her escape each night into a dream world far different from her own.

In fact, sometimes she lives for the fleeting moments she spends at night with the man who fuels every romantic fantasy she’s ever had. But each morning reality returns. She could just cry. But she won’t of course; tears don’t change a damn thing.

Then without any warning, a month before her eighteenth birthday, everything does change. A guardian finds her. He explains, in a strangely familiar accent, that she was stashed on Earth for safekeeping and has been lost to her family ever since. And it is time to return home. To the First World; a land of unimagined beauty.

Abigail and Lucy find themselves escaping New York, ending up on another planet and traversing through an unforgiving wilderness. Yeah, because that sort of thing just happens every day. Luckily an unexpected saviour arrives; the man from her dream-world. Brace is six-and-a-half feet of gorgeous perfectness, wrapped in an arrogance like no other. Unable to trust his assistance, and unsure which of her instincts to follow - kiss him or punch him in the mouth - Abigail eventually accepts his help to find her family.

And what a family. Enter Josian, her father; larger than life and apparently not even human. He is Walker, a planet-less race revered as gods, causing mischief and mayhem through-out this star-system. Unfortunately, there is no time for a cosy reunion, since no one explained that by returning to First World her half-Walker genetics would act as a catalyst setting forth a chain of events which could spell disaster for not only her existence but that of all worlds.
Review:
So this is actually the earliest book on my Kindle - from October 2014!! - so it is definitely time I got around to reading it. And I've read a handful of this authors books, too, so hopefully I'll like this one.
Abby lives in New York about 15 years in the future. Earth has basically gone to...crap. There is no law and order, no governments, no films or tv, no plants. The world is pretty much dying. New York is ruled by Gangers as Abby calls them but Abby and a lot of other children live in Sanctuaries dotted around the USA where they are kept safe until they turn 18 where they are then tossed out on the streets to fend for themselves. Abby is turning 18 in a month and has been wandering the back alleys of the city, getting acquainted with the area. It's here she bumps into Quarn. It turns out Abby is special and Quarn has been watching her back for the past 17 years or so. What follows is Abby's journey to a different realm where she learns all about herself and what she was born to do.
I did enjoy this but it definitely felt a bit more sci fi than paranormal. She goes to a different planet - First World - for starters. Sci fi is not one of my favourite genres but I did really like the characters. Abby was pretty kick arse, she could handle herself well, Lucy was a bit crazy but I really liked her and the rest of the ensemble Lalli, Josian, Quarn and Brace. I'm still intrigued as to who pushed her through that rift to get her into the prison compound...?
There was a lot that seemed to be happening in this. Adventure, romance, fights, family reunions, soothsayer prophecies, new worlds, prison escapes.
Anyway, I was enjoying the romance she had going on with Brace. It was a bit "will they, won't they" but I have to admit, it does seem he might be hiding something. He was acting a bit shifty towards the end and there was also the introduction of the soon to be Emperor - who was also Brace's friend - and his interest in Abby.
I do have an interest in reading the second book if only to see what happened once they landed on the second planet, Spurn, which happened right at the end of this one. And maybe for the whole Abby/Brace thing since I read books for the romance.
at Sunday, October 18, 2020