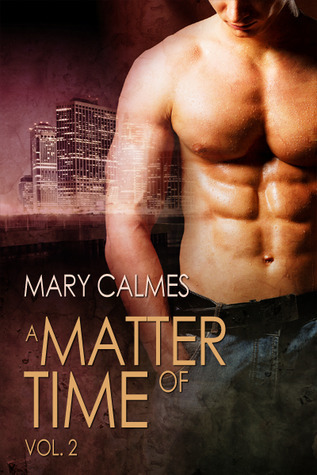 Book: A Matter of Time Vol. 2
Author: Mary Calmes
Series: A Matter of Time, #3 & #4
Genres: M/M Romance, Mystery
Format: Kindle e-Book
Publication Date: 17th July 2011
My Rating: 🌕🌕🌕🌜
Date Finished: 12th October 2020
Description:
Three years ago, Jory Harcourt changed his name and shut the door on a past full of pain, only to emerge stronger on the other side. He has a new career, a great working partner, and a satisfying life—except for the hole in his chest left behind when police Detective Sam Kage walked out with his heart.

Now Sam's back and he knows what he wants... and what he wants is Jory. Jory, who doesn't know if he can survive another break up or losing Sam to his dangerous job, resists returning to the arms of the only man he has ever truly loved. But when a serial killer with a score to settle targets Jory, he will have to decide if love is worth the danger as he tries to solve the case and keep Sam safe.
Review:
So it's been about 3 years since I read the first volume in this series so I had forgotten quite a lot of what went on between Jory and Sam and I hadn't written a review on Goodreads - no idea why?
Book 3 - 3 stars
This starts with Jory at his brothers wedding and the after party, which seemed fun. It's a few days later when he's at a hardware store that he literally bumps into his ex love(r) Sam Kage. Sam has been back for over a year but had made no move to see Jory. Then he seems to be everywhere trying to get Jory to trust him and be in a relationship with him again. It was kinda cute, kinda dominating.
I loved Sam's family. They didn't pull any punches about wanting Jory and Sam back together. It was kinda fun reading that bit at their family meal. Jory had no chance of resisting all those people telling him how Sam was so much more happy now he was back in Sam's life and that he couldn't leave him again.
This one was all about them getting back together, no crime happened. It was rather short, too, only taking up 35% of the book.
Book 4 - 4 stars.
And we're thrown straight into this one. Jory is woken by Sam hovering over him. He comes with news that the police and FBI have put together some crimes that have happened over the past couple of months and discovered that Jory is the link between them. After Sam gets hurt, Jory decides to go hunt down the guy who did it himself.
I had my suspicions about who it was from early on. Like some characters kept mentioning; it didn't add up. And then it turned out I was wrong, in a way! I was very surprised by that. Well done to the author for that.
I did like how Jory was very go-get-it in relation to the person/people who had hurt Sam. He was - as one character pointed out - very good at reading people and getting them to do what he wanted, whether he had to get a little beat up in the process or not. And everyone's protective instincts towards him. Sam and Dane's reactions to him flying across the country to try and track down the culprit was quite funny after a while. He disappears for a week as he holds his own stakeout? They get mad. He flies across the country to chase down a murderer? They go nuclear. It's super cute. Jory is his own kind of special. He's great with everyone. He's the gay best friend you've always wanted.
I do enjoy reading about this couple. They're great together. As the series title suggests "A Matter of Time" as in it was only a matter of time before they got together and lived their happily ever after. I know the series continues with several more books and I did see Sam Kage pop up in a related series, Marshalls, by the same author but I'm happy with how it is right now so I'm not in a hurry to continue it.
at Monday, October 12, 2020