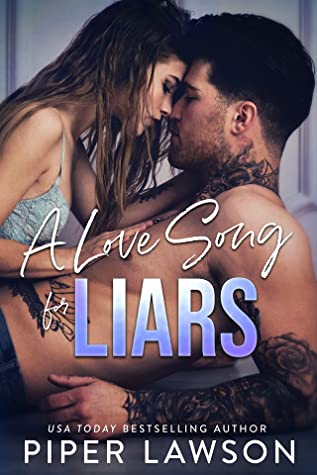 Book: A Love Song for Liars
Author: Piper Lawson
Series: Rivals, #1
Genres: Romance, Contemporary, Young Adult, New Adult
Format: Kindle e-Book
Publication Date: 29th April 2020
My Rating: 🌕🌕🌕🌜
Date Finished: 31st October 2020
Description:
I fell for Tyler Adams when he had nothing but a guitar.
He was my rebel prince, my handsome muse, my twisted friend.
We were worlds apart in every way that mattered:
He was poor, I was rich.
He was beautiful, I was plain.
He honed his talent in private, while I ached for the spotlight.
When Tyler moved in with us, Oakwood Prep fell on its knees to worship at his altar.
He traded my friendship for their crown.
I will never forgive his betrayal.
But some nights...
He makes me want to.
Review:
I picked this up free a few months ago after reading another of the authors works and enjoying it.
This one follows Annie who is playing lead in her schools musical of The Little Mermaid. She wants to prove to her rock star father that she can cut it in the music industry while he doesn't want her anywhere near it, unlike his protégé Tyler. He was her best friend for a long time, the boy from the wrong side of the tracks who she fell for, before her dad offered to send him to the same prestigious private school as her and show him how to make his music better. Then he went from her best friend to the boy she hated in the span of a few weeks. It's hard to stay hating him when he lives in your pool house and keeps coming to your rescue, though.
I found this a quick easy read. I got drawn into the angst that was Annie and Tyler's relationship really quickly. There's an element of love/hate but you quickly see the hate is hiding a hurt from several months ago when Tyler said something she was never meant to hear. They have a rather interesting back story that we learn as the story progresses and I was willing them to just go for it, despite all the things that could go wrong or spoil it for them. They just had a deep connection that I felt deserved to explored.
Unfortunately, it seems their story is spread over three books with a fourth addition as a bonus and I will be reading them at some point in the future but my reading list is almost 100 books long right now - though I have been steamrolling through them lately - so it's on my wish list on Amazon.
It also appears I should have read the Wicked series by this author first as that is Annie's dad Jax's romance but, oh well. I'll read it at a later date, too.
at Saturday, October 31, 2020