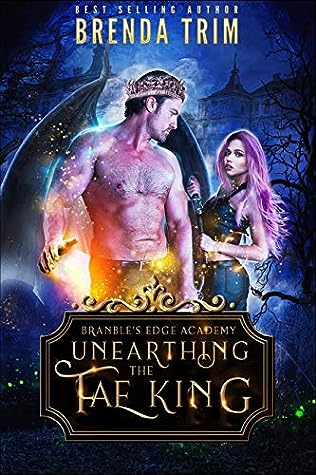 If only things were that simple. Like many over the past decade, Ryker has no desire to attend Bramble’s Edge Academy and fights when the Collectors come to take him to the school. His escape attempt ends in disaster, leaving him incapacitated in the middle of the quad with battered wings and an unwanted attraction to Maurelle.

The sexy female comes with more than he can afford. Too much negative attention. And a smile that makes him forget his name.

Ryker reluctantly develops a friendship with Maurelle after they are repeatedly thrown together. While attending classes and trying to keep their heads down, the pair discovers a plot to poison the students, as well as the Headmistress’s secret group of assassins.

With their friends’ lives on the line, they sneak into the Edge and unearth the fact that he’s the heir to the Fae throne. Nothing like adding complications to their already precarious situation.

Dangers rise, leaving Ryker with the decision of whether or not to reveal he survived the murder of his parents decades ago. Problem is the fallout will bring more casualties than he can live with.
Review:
I got this one, too, as a freebie from Amazon a week or two ago for the UF/PR A-Z Challenge on Goodreads.
This starts with Ryker trying to escape from fellow fae who are trying to force him into going to the Bramble Edge Academy to start his training. He's resisting after his mum tells him tales of abuse and strange treatments but he ends up being captured and starting at the academy. A week or so later Maurelle is also captured after her powers manifest but her mum is killed in the process. Neither of them are happy at the academy but neither put up much of a fight against the strict headmistress and they don't understand why. Then they decide to investigate.
This had a different description which drew me in. Humans are in charge and fae are classed as a lower form of being, forced to live in squalor and in the edges of big cities. The academies are run by the humans and fae who leave the schools are only too happy to work under them. It was a puzzle to me just why that was.
Unfortunately though, it was taking a long time to get where it was going. I think if the plot had sped up a little or had a little more excitement going for it, I would have been very into this. As I mentioned above, it did have a promising premise but it was failing to grab me. I got to a point where I didn't want to pick this up anymore.
As for the writing. Well, it felt a little stilted at times. They may be fae but what teen talks like they were doing in this? Their actions were more teenager like than their words most of the time. The sentences didn't always read the best, either:

"They turned down another street and she was surprised to see a number of Fae out and about still this late at night."

"The moment she noticed he blended with the shadows that ended and reality came back."

I'm sure some people will love this but I like a good bit of action in my paranormal books and there hadn't been any in those first 36%. I was a little disappointed.