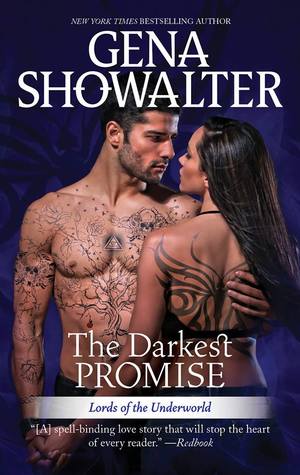 Book: The Darkest Promise
Author: Gena Showalter
Series: Lords of the Underworld, #13
Genres: Demons, Paranormal
Format: Paperback
Publication Date: 27th March 2018
My Rating: 🌕🌕🌕🌕
Date Finished: 11th September 2020
Description:
Possessed by the demon of Misery, Cameo isn't allowed to experience joy. If she dares, her memory is wiped clean. With no other recourse, she sneaks into a land more fantastical than any fairy tale, determined to find the one man with the key to her redemption.

Lazarus the Cruel and Unusual rules his kingdom with a single unwavering focus: to build his army and annihilate his enemies. Nothing distracts him - until Cameo. He is relentless in his quest to make her smile and seduce her into his bed.

As dark forces conspire against them, threatening to destroy the fragile bond they've forged, the once-calm Lazarus grows crazed. Every heart-stopping kiss and wicked touch causes Cameo to teeter on the brink of happiness. But if she falls, she risks forgetting him forever.
Review:
So I've recently read The Darkest Torment and back in May I read The Darkest Touch, both of which have led to Cameo and Lazarus' story - and I'll admit I am looking forward to reading this one because they have shared some steamy scenes before.
This starts with Cameo using the artefacts to head back to Lazarus in his realm after having snippets of memory of a man that she craved but unable to remember him thanks to her demon. She only knows it was Lazarus thanks to conversations she's had with her friends. She literally falls from the sky and destroys a few organs as she lands on the ground, leaving her in agony until she heals. She eventually manages to get to her feet and wanders the land until she finds Lazarus' kingdom.
I read the first hundred pages in one sitting, I was getting that pulled into this. I was intrigued by their relationship and how they could be together when her demon would never allow her any joy and when her closeness was heralding his death. Their relationship was passionate and Lazarus seemed to know a lot about her and her demon, knowing how to overcome the sadness it always made her feel. He himself, was a bit of a mystery. We knew very little about him but that changed as the book progressed.
I did enjoy this. All the gang are included in this again and I loved seeing their closeness once more. There is one scene that had me smiling like an idiot: a mud fight. Lazarus starts it with Cameo but before long everyone is joining in and it made me a little warm and fuzzy to see all these warriors having fun with their females.
I did feel like something was missing, though. I didn't enjoy it as much as I thought I would when I started this. I even skipped a lot of the sex scenes towards the end, they just weren't working for me anymore.
I do have book 14 to read, Gilly and Puck's story, but I think I'm going to give this series a little break for now.
at Saturday, September 12, 2020