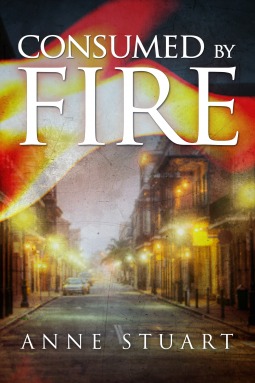 Book: Consumed by Fire
Author: Anne Stuart
Series: Fire, #1
Genres: Romantic Suspense
Format: Kindle e-Book
Publication Date: 26th May 2015
My Rating: 🌕🌕🌕
Date Finished: 18th August 2020
Description:
Evangeline Morrissey remembers the last time she saw her husband: it was during their honeymoon, right before he stole her grandmother’s earrings and abandoned her. Now, five years later, the enigmatic man who’d broken her heart and destroyed her trust is back. But she’s not the same naive young woman who fell for him so easily.

Marrying Evangeline and letting her think he was nothing but a common thief had been James Bishop’s plan all along. As an assassin for the Committee, a covert agency dedicated to stamping out international crime, he had no business even thinking about marriage. But it was the only way to protect Evangeline after she’d unwittingly wandered into his operation against a group of human traffickers, placing herself in grave danger. And now that James’s vigilant watch over Evangeline’s life has revealed to his enemies that she’s his one true weakness, he must set out to have, to hold, and—above all—to protect his bride.
Review:
I read two of Anne Stuarts books a while back, maybe a few years ago now, and quite enjoyed them. I then went and bought this one - cheap - a short while afterwards but never really felt in the mood to read it. I'm using it as "C" in my Romance Readers A-Z Challenge on Goodreads (which is honestly a good way of reading books you've been putting off for whatever reason.)
This starts with Evangeline heading up some trails to a tiny church she knows of in Italy. While there she bumps into James Bishop, an attractive but mysterious man, who sweeps her off her feet and into a whirlwind romace and marriage before disappearing within the week. Fast forward five years and James comes barrelling into her life once more.
We do read this story in dual POV's. We know what's going on from James' POV before he leaves Evangeline but it comes as a complete shock to her so she is understandably standoffish with him to start with and tries to escape. As they head from Canada to New Orleans they slowly begin to talk to each other and trust forms. Their relationship starts to bloom once more and though they try to stay away from each other as much as possible, they do have some rather steamy/angry sex in the camper.
I have to say I did feel the ending - as in the showdown with the bad guys - was over quite quickly. I expected it to take a while but I think it was over with in about five pages. (Note: I read in continuous scroll on my Kindle so it might not have been that long.) It felt kind of an anti-climax after the build up.
One thing I will say for the men Stuart's writes, is that they are not always the most likeable but there is something about them that draws you in. I've just been looking through my review of the first Anne Stuart book I read, Nightfall (review in link), and loved my little comments as I updated my progress through the book. James wasn't quite as entertaining but he could go from passionate to ice-cold in seconds.
at Saturday, September 19, 2020