You, Me, Forever - Jo Watson 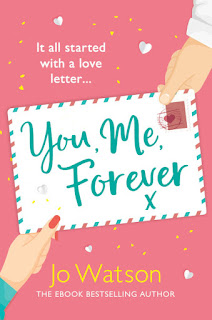 Description:
It all started with faulty elevator - and a love letter...

Writer Becca Thorne needs an idea - fast! She might have a huge bestseller to her name but, with the deadline for book two approaching, Becca knows she's in danger of losing the career she cares so much about. But Fate has other plans for her when she almost plummets to her death with two strangers in a faulty elevator.

Although Becca emerges in one piece, her precious vintage handbag doesn't, and that's when she realises that inspiration has been with her alll along. Hidden inside the bag's now-torn lining is a set of beautiful love letters.

It might not be her story, yet Becca can't seem to get the romantic words out of her head and feels compelled to discover who wrote the letters. But there's more waiting for Becca than the tale of a romance from long ago - it might be the chance to live her own love story and follow the path Fate has always intended her to...

I do enjoy a good Jo Watson book. I think this one is my fifth book.

This one follows Becca - full name Pebecca after an incident at the registry office - after she struggles to come up with a new story for her agent. She has a near death experience just before going to see her agent and in the chaos, the lining of her antique bag splits and she finds a collection of love letters. She reads a few and then heads to her agents, who's a fiery personality. In a panic, Becca reads one of the love letters out and the agent gets very excited at the thought of the "book". Becca, still panicking, reads a few more of the letters and then heads out to find the place where the letters were written.

I definitely think Becca is a "do now, think later" kind of girl. She seems to get herself into a lot of mischief without trying. And then she meets Mike, the town's only police officer. There's an instant attraction between them but they ignore it, at first, until they bump into each other that third time at the bar. Their relationship was cute, if a little unorthodox. Mike always seems to turn up as Becca is doing something crazy and annoying the locals.

As well as the romance there is the mystery of the letters and figuring out who sent them and who they were meant for so Becca could successfully write her story. They go on a journey through the small town and it was a fun little adventure. From a fenced compound of eco lovers to a nudist beach, they do end up doing some crazy things.

I liked how Becca finally wrote her story. It was a brilliant idea and I'm glad she found somewhere where she felt like she belonged with people who cared. It was all she'd really wanted since she was a child.
at Thursday, August 06, 2020