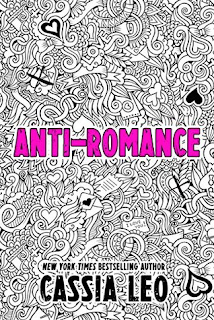 
Laney Hill is screwed. On the bed. On the treadmill. On the hood of a BMW. And on her boss’s desk. Then she’s screwed again when she steps into the free clinic and finds out she has gonorrhea. That dirty prick gave her gonorrhea! She’s totally going to break up with him...until he breaks up with her...because he’s married!

A night out drinking with friends leads to a fateful--yet awkwardly-sloppy--kiss between her and her best friend George Bratton.

George has been single and pining for his ex-girlfriend ever since their breakup two years ago. When his ex invites him to her destination wedding in London, self-destructive George and gonorrhea survivor Laney make a deal to go as each other’s dates. It will make great material for Laney’s “Anti-Romance” blog and maybe it will help George finally get over his ex. Nothing could possibly go wrong, right?

This was a freebie I downloaded about four years ago and I've put it off for a while because of it's rather bad rating on Goodreads of 3.64. I feel I should point out that most books I read have a rating of between 3.9 and 4.5 stars, so I was wary that I wouldn't like it.

We follow Laney, who writes a blog about her exploits with different men and it's very anti-romance/romance is dead - hence the name of the book. She's currently seeing someone in politics but he gives her an STI and it turns out he is married so she's ready to write her post about him. Then she meets her neighbour Kade, a hot musician who really likes her. And then there's her best friend of years, George, who's been in love with her for years.

I had nothing against Laney spreading the love, really, but I generally prefer to focus on one guy and she was changing between Kade and George rather quickly and easily.

And then the book ended at 49%, mid chapter, mid crisis. It felt too abrupt. Just cut off without some sort of proper ending. I'm understanding it's low rating.

I feel I should also point out that this book is no longer available on Amazon unless you want it as an audiobook and the second part Pro-Love isn't anywhere I can see so I will never know how this story ends. I have to say I was pro Kade since I like the kind of bad boy he seemed to be.

P.S. The best bit for me was probably the four pictures that had hidden penises in them.
at Sunday, August 02, 2020