The Ballerino and The Biker - Rebecca James 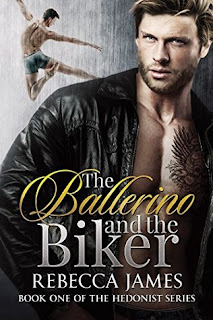 Most of his young life, Morgan Wentworth has dreamed of becoming a principal dancer in a prestigious corps de ballet. After years studying the art in Milan, Morgan comes home to New York City to apprentice with the Manhattan Ballet Company only to be hit by the unexpected death of his older brother, Jake. The grieving dancer learns his life is threatened by a dangerous rival motorcycle gang and that pierced, tattooed, HOT biker Zeke Ivers has been assigned by Jake’s MC to guard him. Saddled with the constant presence of the infuriating man, Morgan juggles the demands of an exhausting dance schedule as well as his new responsibilities as CEO of his family’s multi-million-dollar company. He never expects to develop an attraction for the straight, obnoxious biker, but that’s exactly what happens.

Estranged from an abusive family, Zeke Ivers has lived at the Sentinel’s club house and worked on cars since he was a teen. When fellow club member Jake Wentworth and a rival club president’s girl are killed on Jake’s bike, the Sentinel’s president delegates the protection of Jake’s little brother, Morgan, to Zeke. Zeke would do anything for the club that pulled him off the streets, but Morgan’s a ballet dancer, for Christ’s sake, as well as annoying as hell. Still, Zeke finds himself inexplicably drawn to the young man. The more attracted Zeke becomes to Morgan, the more the biker is forced to examine his sexuality and decide whether two people from opposite sides of the tracks could possibly have a future together, or if Zeke should do what is fast becoming too painful to consider: let Morgan go

In this one Morgan has just buried his older brother, Jake, who was part of an MC. He was the only family that Morgan had left in the world and now so he focuses on his ballet with the help of his best friend, Nikki. Only Morgan arrives home to someone in his apartment and he struggles against the man. It turns out the man, Zeke, is from Jake's MC and is there to protect him from a rival biker club after Jake died with a female from the other MC. Zeke is drawn to Morgan and vice versa so it's not long before sparks are flying, though Zeke is adamant he's straight.

This definitely felt like a gay-for-you story. Zeke wasn't attracted to any other guys really, though in the end he settled on himself being bisexual. He's the strong silent type and completely opposite to ballerino - Italian for male ballerina -  Morgan. They do have an intense attraction for each other and it takes a while for anything to happen but once it does, it quickly turns into more than physical attraction. Opposites attract and all that.

I'm intrigued by some of the other MC members like Blaze and what's going to happen between Dante and Swish.

Speaking of the MC, we didn't really see much of that side of the story. Most of the time Zeke was working on cars in the garage or the guys were settling down to meals together. We know the MC run a business out back that films their own pornography but that's about it. And we had that short bit at the start involving the Hedonist's rivals wanting to hurt Morgan in retaliation for the death of one of theirs but that was it.

That end bit with Morgan's stalker was a bit strange, if you ask me. I wasn't expecting it to take that turn or be that person and it threw me a little but it all worked out in the end due to Morgan's quick thinking.

As mentioned above I do think I'll look up this series in the future to see what happens with Dante and Swish and Blaze with his questions on gay sex etc.
at Thursday, July 09, 2020