All Kinds of Tied Down - Mary Calmes 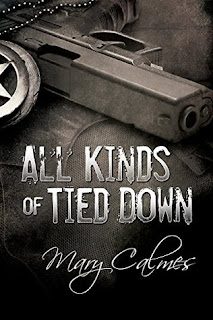 Deputy US Marshal Miro Jones has a reputation for being calm and collected under fire. These traits serve him well with his hotshot partner, Ian Doyle, the kind of guy who can start a fight in an empty room. In the past three years of their life-and-death job, they've gone from strangers to professional coworkers to devoted teammates and best friends. Miro’s cultivated blind faith in the man who has his back… faith and something more.

As a marshal and a soldier, Ian’s expected to lead. But the power and control that brings Ian success and fulfillment in the field isn't working anywhere else. Ian’s always resisted all kinds of tied down, but having no home—and no one to come home to—is slowly eating him up inside. Over time, Ian has grudgingly accepted that going anywhere without his partner simply doesn't work. Now Miro just has to convince him that getting tangled up in heartstrings isn't being tied down at all.

This has been on my "shelf" on Goodreads for a few years so it's about time I read it.

It starts with a case. Both Marshals are attempting to apprehend a suspect but it's Miro who ends up being body slammed by the guy they're chasing, breaking his wrist in the process. Miro's partner, Ian, tries to take him to the hospital and we see their banter and connection. It's clear they're close but occasionally you see glimpses of there being more between them.

It took a while for those glimpses of more to actually come about. It was a little after half way when Miro finally saw the signs his best friend and partner had been broadcasting for a little while by then. I think his gaydar was a little out of whack because he never seemed to notice when guys were flirting with him.

They did have a really cute dynamic when they finally got together. Both really protective of the other but it was Ian who turned out to be the one who needed reassurance in their relationship.

And Sam Kage made an appearance in this as their boss and I read the first two books of his series, too, a while ago. That was a nice surprise.

I know this series is just based on Miro and Ian and their building relationship and I wouldn't mind continuing this series to see how it pans out.
at Thursday, July 23, 2020