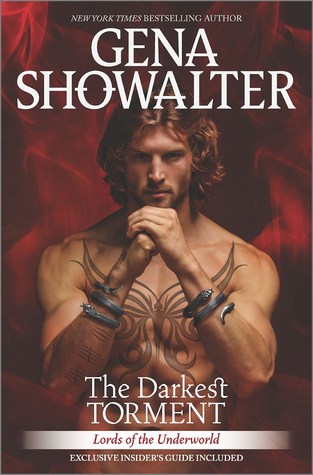 Can Beauty tame her Beast?

Driven to his death by the demon of Distrust, Baden spent centuries in purgatory. Now he's back, but at what cost? Bound to the king of the underworld, an even darker force, he's unable to withstand the touch of another and he's quickly devolving into a heartless assassin with an uncontrollable temper. Things only get worse when a mission goes awry and he finds himself saddled with a bride just not his own.

Famed dog trainer Katarina Joelle is forced to marry a monster to protect her loved ones. When she's taken hostage by the ruthless, beautiful Baden immediately after the ceremony, she's plunged into a war between two evilswith a protector more dangerous than the monsters he hunts. They are meant to be enemies, but neither can resist the passion burning between them and all too soon the biggest threat is to her heart.

But as Baden slips deeper into the abyss, she'll have to teach him to love or lose him forever.

I wasn't expecting Baden's story to be next. I assumed it would be William, the Ever Randy, or Cameo with Lazarus since both of their stories have been progressing in the background of previous books. So I'll admit my interest wasn't all that captured by his story. I started this some time in June and picked it back up after a lengthy break in September.
If I remember correctly this starts with Baden in a bad mood, not knowing how to cope with the new beats inside him and needing a way to relax so William hires some female company for the night. Only they are assassins sent to kill him and he finds himself in the middle of a war between Lucifer and Hades. As one of Hades' assassins, thanks to the wreaths, he now finds himself - along with Pandora - on missions to earn points to see which of them will be given their life back. One mission takes him back to Budapest and straight into the middle of a wedding ceremony between his target and Katarina, who is being forced into the marriage to save her loved ones.
As mentioned above, I wasn't really craving this book when I realised it was Baden's story and not one of the others but after the month break reading other things, I have to say that I quickly got sucked back into the story. I grew to like Baden a lot. He got good at dealing with all the crap that Hades threw at and asked of him. Katarina was a little harder for me to like. She did kind of treat him like she would her dogs but I do get that the beast that occasionally took over Baden was rather animal like.
I loved seeing this group of friends and warriors again. They're an eclectic bunch but will protect each other to their deaths.
This one has set us up for Gilly and Puck's story - a way out of left field decision from the author after making us want Gilly and William for the past ten books or so. And also Cameo and Lazarus which has been brewing since the previous book - and coincidentally the next in the series.
P.S. I loved the reference to Immortals After Dark by Kresley Cole. Keeley, I love that series, too!
at Monday, September 07, 2020