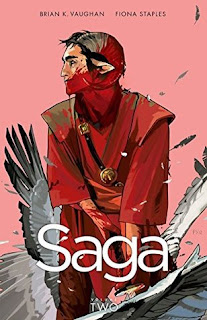 Thanks to her star-crossed parents Marko and Alana, newborn baby Hazel has already survived lethal assassins, rampaging armies, and alien monstrosities, but in the cold vastness of outer space, the little girl encounters her family's greatest challenge yet: the grandparents.

I borrowed this from the Kindle Unlimited Library.

I read the first volume of this years ago and was intrigued by why these two characters were causing a war across almost all the universe and this one explains it a lot more. They are from rival sides of a war and Marko was Alana's prisoner after he handed himself in. They grew closer and she eventually helps him escape his imprisonment. Fast forward a while and almost every assassin in the galaxy is after them. They get interrupted by Marko's parents who cause havoc for a while and we see a few childhood scenes.

I do quite like this series but it isn't grabbing me as much as the other recent Graphic Novel I read is. I'm intrigued as to what's going to happen in the end and if the trio will survive and win the war against everyone who's gunning for them.
at Thursday, June 18, 2020