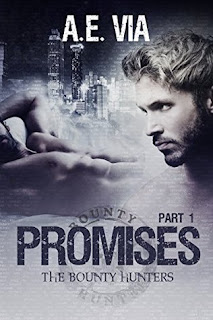 Duke Morgan owns and operates one of the largest bail bond companies in Atlanta. Not only does he bond criminals out of jail, he and his notorious group of bounty hunters will also track them down and ensure they show up for court.

Roman ‘Quick’ Webb is Duke’s business partner and best friend. Both men are in their forties and have given up on the happily ever after with the ranch-style home, and white picket fence. They’d both tried it and failed miserably. But they have their friendship and they have the business.

When Quick’s son, Vaughan Webb returns – after seven years - from studying abroad with his law degree in hand, he’s back to claim what he’s always wanted…his fathers’ best friend… Duke Morgan. Vaughan has always claimed to be a classic gentleman with an old soul. He didn’t party and screw up in school like his buddies. He was focused and dedicated to becoming the man worthy of Duke’s love.
It’s a complex and messy situation as Duke and Quick figure out how to still be best friends when one of them is sleeping with his friend’s one and only son. But when Duke is hurt on the job, all the unimportant trivialities fall to the wayside and Vaughan and Quick put their heads together to save Duke.

I borrowed this from the Kindle Unlimited Library.

I haven't read a gay romance in a while. This one tells the story of Duke, a bounty hunter/bail bondsman, who's in his mid 40's still pining over the guy he thought he was in love in, Judge. Then steps in his best friends son, Vaughan, a 31 year old lawyer who's had a crush on Duke for the past decade or so and has now come back to Atlanta to claim him as his own. Not all goes to plan though.

Duke is wary of dating his best friends son and Vaughan is determined to make him realise how right they are for each other. It's kinda cute, how they act around each other - like they're having their first crush.

Admittedly though, I did think that Vaughan's behaviour was a bit full on at times. Following Duke to Macy's and then following him into the dressing room? Fair enough we had a hot scene in that dressing room but it was still a little stalker-ish. I think because of that I didn't really feel their relationship. There were some cute moments throughout.

I did like how Duke saw Vaughan. He was bowled over by the sight of him and his description of him was downright awesome. It was how he described Vaughan's voice that I liked the most. Even I got a few tingles.

I liked it but it didn't completely pull me in. The relationship didn't entirely work for me. I get lust but these two seemed to fall into love really quickly and easily. I felt like I missed something.

One thing that has got me intrigued is Quick and Dr Chauncey. With how Quick spoke to the poor doctor in this one, I have no idea how he's going to straighten things out with him but after seeing that bit from the doctor's POV, I really hope they do because the poor guy deserves someone who'll stay.